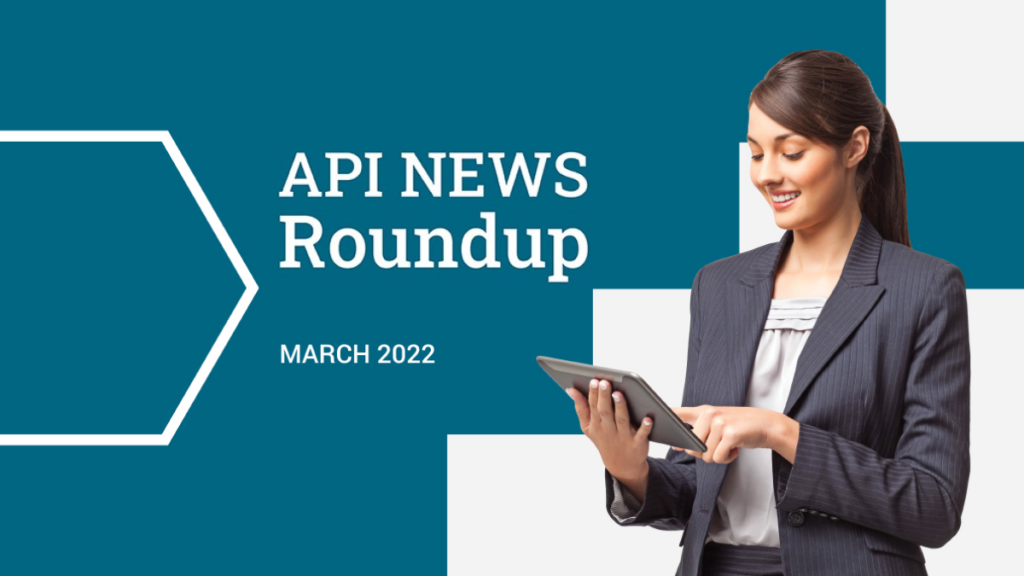 Here are op-eds and company news you may have missed in March, along with top API and digital transformation stories from around the web.

Axway CTIO Vince Padua writes in Forbes this month about how universal API management is an e pluribus unum, or one-from-many, principle to guide enterprise growth.

Read more on why he believes the concept is deeply relevant to technology and business, especially as application growth is now defining how B2B and B2C business is conducted.

TechCrunch’s Alex Wilhelm takes an interesting look at how APIs can evolve into platforms. Documenting the dramatic growth of shipping software company Shippo, Wilhelm concludes that “SaaS is neat, but APIs could be the future-facing business model to beat.” Read Wilhelm’s piece on riding an API to platform status here.

Axway Catalyst Erik Wilde points out this MIT Sloan Management Review piece is a great foundation for the “KPIs for APIs” topic we often discuss around API journeys.

He shares his favorite quote on developing performance metrics from “The Quest for a Killer KPI” by Agoda’s Omri Morgenshtern, Robert Rosenstein, and Peter Allen:

“Continue to ask yourself, ‘How would it be possible to achieve this KPI but fail to meet business goals?’”

The Business of APIs

The next logical conclusion is that the wrong KPIs can doom digital transformation. Still in the MIT Sloan Management Review, the authors of a second article say the key to successful digital initiatives is having data-defined business objectives, rather than just looking at technological capabilities.

“Transformational leaders recognize digital strategy not as an end but as a means to achieving measurably better business outcomes. They design digital plans around strategic objectives. And, crucially, they identify a portfolio of enterprise KPIs that measure business value delivered by the transformation — not the company’s technology infrastructure.”

This point – that simply investing in a technology alone won’t bring about desired results but rather having the right business strategy – is also a clear takeaway from Axway’s API Adoption Survey released in March:

In the study of API decision-makers, 71% agree or strongly agree that they didn’t experience the business results they had hoped for with their APIs. And nearly all of them know why: 69% expect return on APIs to increase – by 21% – if developers could more easily discover, subscribe, or use their APIs. (read more about the 2022 Axway API Adoption survey here)

APIs can be a major revenue driver for organizations: a business-led approach to API strategy can increase API consumption, leading to new business opportunities, an increase in agility and revenue, and better customer satisfaction.

Being able to rely on vendor expertise and guidance is also a factor in making better decisions about APIs. The Axway Catalysts help enterprises set the right KPIs – in fact, Erik Wilde and Eric Horesnyi have even shared some great advice on setting KPIs for APIs, so start here.

Watch this webinar replay for a more in-depth discussion on KPIs and APIs.

Finally, another reason an API First approach makes so much business sense. Peter Schroeder looks at the meteoric rise of several famous API First companies (can you guess which ones made the list?) since 2015 in his API Economy newsletter:

“After some initial research, I’m sure you won’t be surprised to hear they are ALL doing incredible things. But I think you’ll be surprised to learn how truly meteoric their success has been.

The TL;DR is that on average, they’ve grown 100x+ in valuation.”

March 8th was International Women’s Day, and Axway’s female Griffins – that’s what we call ourselves at Axway – shared their experiences.

Axway’s women leaders were also eager to speak out about progress that’s been made and the long road still ahead to achieve gender parity, particularly in the tech field.

Dominique Fougerat, EVP People & Culture at Axway, points out that while women make up 49% of the UK workforce, only 19% of tech workers are women.

“Creating a more female-friendly tech industry will require fundamental changes at the level of companies and employers, but also within the education system and the underlying assumptions and biases that are still prevalent in society today,” Fougerat tells Global Banking and Finance.

She further adds in Cyber Protection Magazine that a recent report into gender diversity showed that, based on the current rate of progress, it will take another 100 years to achieve gender equality. “The change remains too slow,” Fougerat says.

Axway’s Head of Open Banking, Eyal Sivan, says the end of March proved to be a big week for open banking in Canada, with the government’s Advisory Committee on Open Banking appointment of Abraham A. Tachjian as open banking lead.

“The road ahead will certainly not be easy for him, but there are already many ready to lend a hand. There’s hope some of the leg work is already done,” Sivan says.

That same week, the CIO Strategy Council | Conseil Stratégique des DPI also released the first draft of their proposed standard for open finance in Canada. The group has been instrumental in setting national technology standards, in spaces like data governance, AI, and Digital ID, and Sivan was co-chair of the working group that developed the standard.

“There are strong signs the big five banks are getting on board as well,” Sivan adds. “At the end of February, Victor Dodig, the innovation-minded CEO of CIBC, announced on an earnings call that the bank welcomed open banking and encouraged policymakers to think about the offense and the defense – good advice.

While its truly wonderful to see my old employer step out in front, you can bet the other big banks are following suit with open banking strategies of their own.

Undeniably, open banking is on the march in Canada.”

Need a primer on open banking? Sivan contributed to an in-depth guide on open banking in Fintech Magazine last month. Read what two factors he believes will fundamentally shift the focus of open banking over the next year, from regulatory compliance to the generation of real value, here.

Meanwhile, Brazilian publication segs notes 79% of Brazilians would not shop on unsafe websites out of concern for personal data. Dive deeper into the global Axway consumer survey here.

Has screen scraping seen its day? As Karen Holmes points out, there’s a delicate balance between eliminating screen scraping and maintaining the convenience of sharing your data with a third party. Read why experts are pushing for open banking as a better alternative to screen scraping.

The FBI’s Internet Crime Report 2021 highlights the increased trend of cybercrimes impacting businesses. In light of recent events, it’s more critical than ever for companies to lock down their APIs to ensure security.

Check out how Axway secures your most critical APIs, and read up on what you need to know about API Security + some essential best practices for API security.

That about covers it for our March API News roundup: if you’re curious, see what Chief Catalyst Brian Pagano thinks might become of Meta and other large social media platforms in the coming years – along with other industry predictions for 2022 – here.

And don’t miss the latest Transform It Forward podcast episode with Futurum Capital co-founder Guga Stocco on how digital is driving the “open” revolution. They discuss everything from AI to open banking and how technology is driving industry transformations overall.

Thank you for reading, and stay tuned for more API and digital transformation headlines next month!