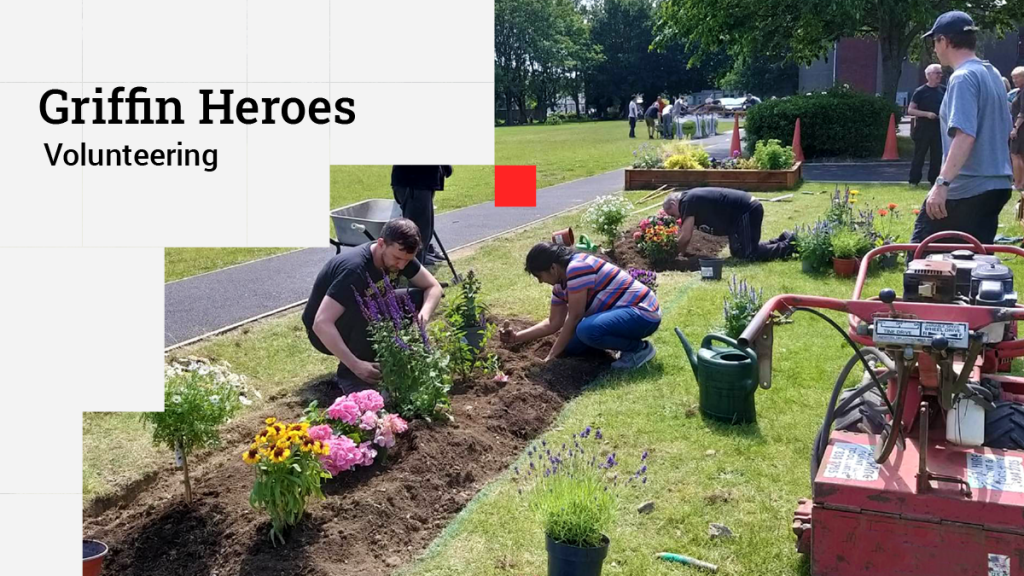 In line with our brand-new feature released last week, Griffins at Work, I’m excited to announce Griffin Heroes, an update to our existing Griffin Spotlight feature. Griffin Heroes is dedicated to celebrating the talented, diverse workforce Axway employs by recognizing exceptional employees and sharing stories about their roles, lives, and ongoing commitment to supporting Axway’s mission, vision, and values.

Though the entire Dublin office participated, we chatted with the project leads Miriam Aguilar Sanchez and Orla McCarron. Miriam is the Senior Business Unit Coordinator for Ireland and has been with Axway for seven years, since 2015. Orla is the People & Culture representative for Ireland and the UK and has been with Axway for thirteen years, since 2009. Both Miriam and Orla are passionate about gardening; between Miriam’s balcony garden and Orla’s garden allotment and beehives, they were the perfect leaders to take on a large-scale gardening project with their friends and colleagues. 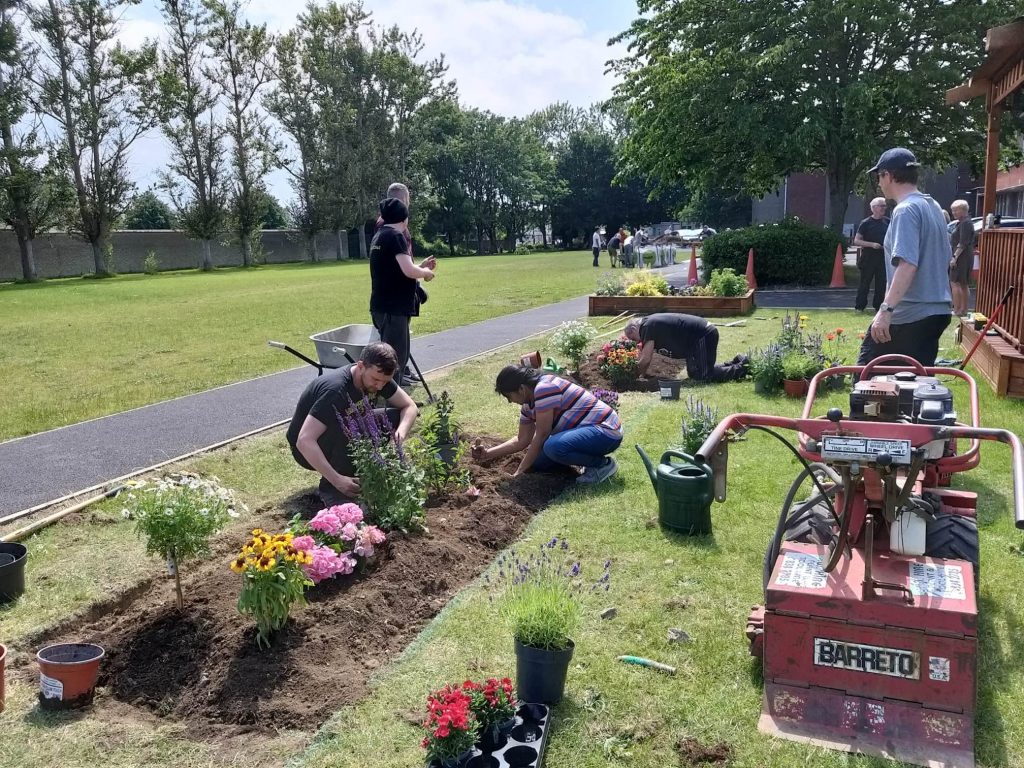 Occurring annually at Axway Dublin, Volunteer Day is an opportunity to give back to the local community, improving the access, facilities, and lives of those in need. The team dedicates a specific full day each year to complete a community project, with hopes of increasing their volunteering activities in the years to come. “It also means getting to spend time with colleagues that you usually would not have the opportunity to work with,” Miriam and Orla tell us, “And to see them in a different environment.”

In true #BetterTogether spirit, the Dublin office has a long history of past Volunteer Day initiatives, including improving the gardens of an elderly residential facility and renovating an after-school center for children from underprivileged backgrounds.

Miriam and Orla traditionally work with Volunteer Ireland, a volunteer development organization in Ireland that leads volunteering initiatives through national events and partnership with 29 volunteer centers across the country. They regularly work with charities, non-profit organizations, and corporations to provide event organization, volunteering programs, training, and consultancy. Volunteer Ireland put the team in touch with Scoil Chaitríona Cailíní, a school for girls 8-12 years old located in Coolock, a suburb of Dublin, that opened in 1960.

“In 2019, they had a big fire during the night which destroyed almost half of the school,” Miriam and Orla tell us. “They managed to organize a temporary building for the girls in the garden, but then the pandemic happened. The school managed to raise money themselves and, with the local community, rebuilt the school and welcomed students back after lockdown. However, the garden remained unfinished, and this is the area they felt would benefit most from a volunteer project.”

“We received many fantastic ideas but were somewhat curtailed by budget and had to tell them a jacuzzi wasn’t possible!”

Before beginning work on the garden, the Axway Dublin team reached out to the school’s principal to collect some feedback from the students about what they’d like to see and worked closely with the school’s gardener to make a plan. “Ideas which we included were raised beds for vegetables so the girls could learn about growing their own food and cooking in the school’s kitchen. Flower beds were also designed to encourage more bees and butterflies in the garden.”

The office split into five sub teams to help conquer the enormous project. “Each team member chose the task they wanted to be involved with beforehand and we tried to allocate them in the right team,” Miriam and Orla say. “We also had team leads in each team who did an amazing job!” Together, the office weeded, installed wooden raised beds for vegetables and flowers, built trellises, and painted all the fences and boxes.

“We lucked out by having our Volunteer Day on one of the sunniest, warmest days of the year, which is quite an achievement in Ireland,” Miriam says. “Luckily, we had brought SPF and got to sit outside in the glorious sunshine eating a fabulous Irish breakfast provided by the school.” 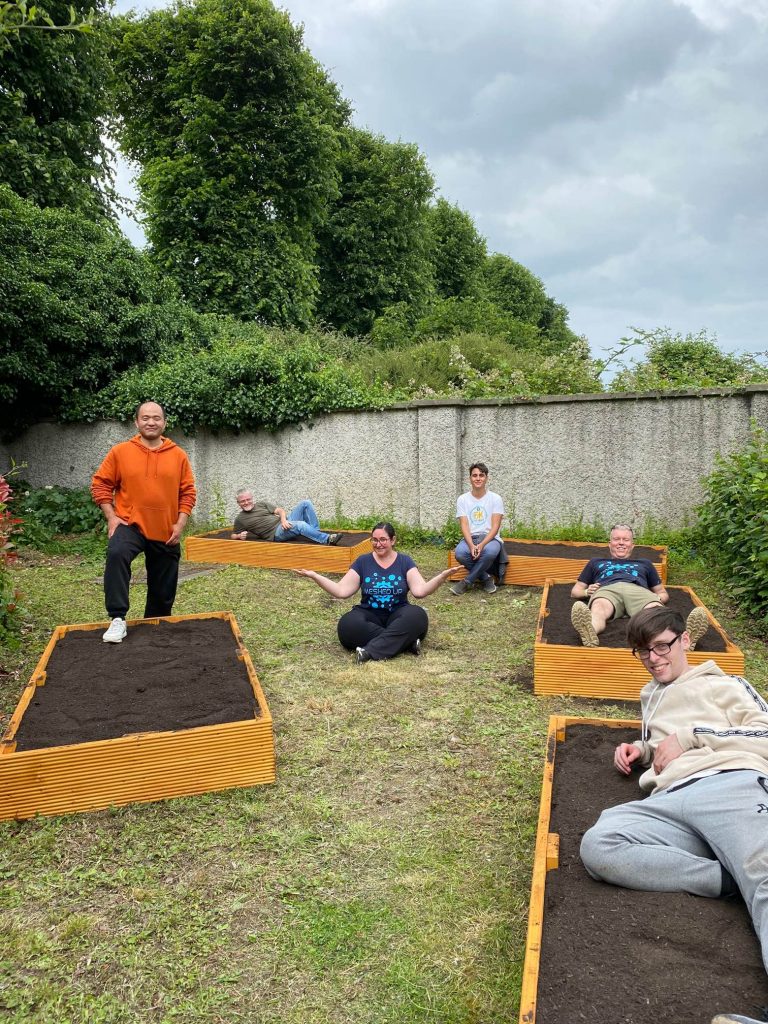 The best part of the day

For Miriam, the best part of the day was working on one of the most challenging teams: building, painting, and filling the wooden boxes that would become the raised garden beds—the primary feature of the garden redesign. “I was happy feeling I could build something from scratch,” she says. Even when the work was tough, Miriam and Team Beds made sure to stay positive and have a ton of fun. “I was in the boxes moving the soil to make sure all were filled correctly, and the guys were in charge of transporting the soil to the raised beds. We had to walk and jump on the soil, which was great fun. We then took the photo of the team lying down in the ‘beds.’”

The best part of the day for Orla was participating in a special Q&A session held with several of the ongoing classes. She was part of a team of six female volunteers from Axway Dublin, including others from Finance, People & Culture, and R&D. “The girls came out to the garden with their teacher and each class sat around in a circle on the grass with two of our volunteers,” Orla says. “It was a great session where the girls were asking us about our career paths, about going to college, and what it’s like working at Axway.” 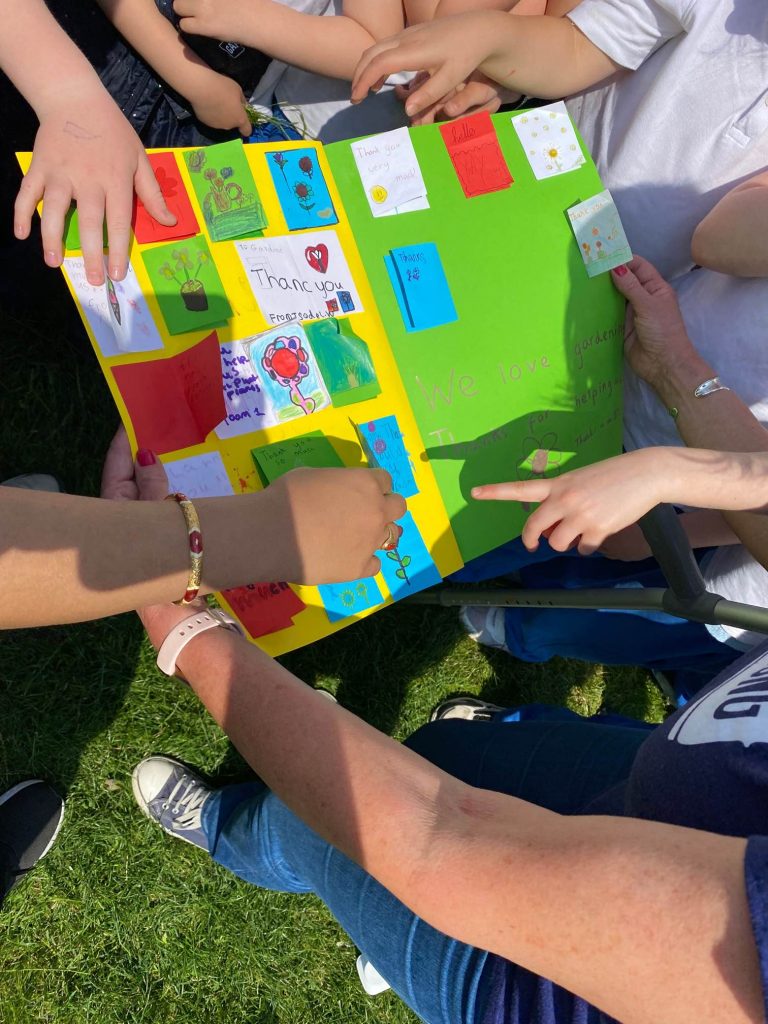 “We are always looking for new opportunities, and plan to stay in touch with the principal of the school,” Miriam and Orla tell us. “We’d like to try to do further volunteering throughout the year with them. One idea we’re discussing is doing a few coding sessions with the girls!”

We’re all inspired by the passion and enthusiasm our Dublin office has for coming together to make a difference—and admire their commitment to making volunteer work part of their Life at Axway. Thank you for sharing your #BetterTogether spirit with your local community!

Learn more about who we are and how Axway commits to its Corporate Social Responsibility promise.