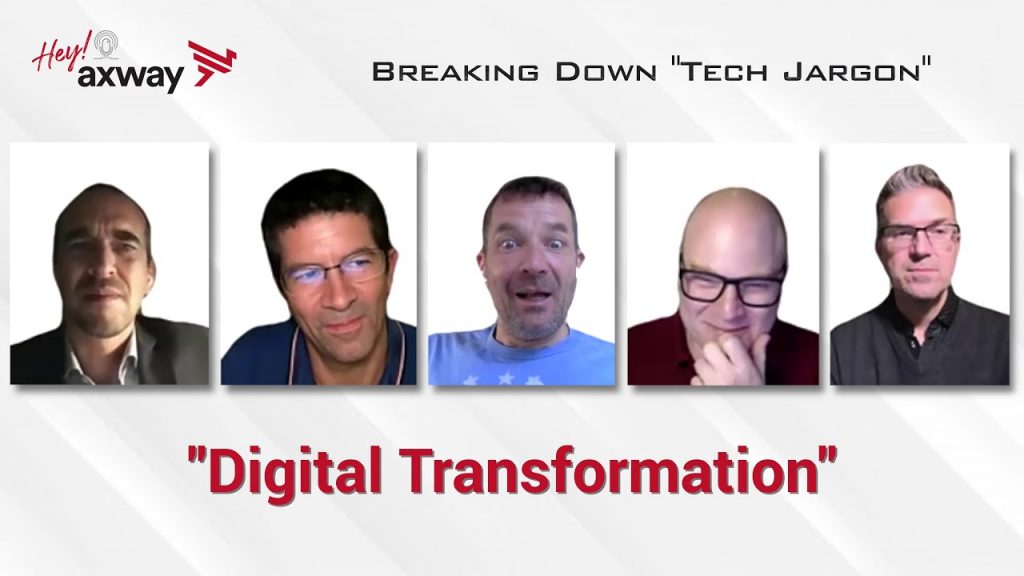 Today on Hey Axway, the Axway Catalysts — an elite supergroup of experts from around the world who are passionate about all things digital and the API space, delve into “tech jargon.”

Tech jargon — words to live by

Tech jargon refers to special and particular words often used by Marketing and Sales reps. “Enterprise,” “scalable,” and “interface” are some that come to mind. While these words can be helpful to some, for those in a non-technical role, what does all this tech jargon really mean?

Five Catalyst and some real answers

Big Data, according to Emmanuel Methivier, “Is the opposite of the structure of data.” Whereas Erik Wilde says, “It’s data that doesn’t fit on my computer.”

Eric Horesnyi chimed in and said, “velocity, volume, variety.” These are three elements that qualify data as “big data.”

Let’s not forget “variability.” Erik Wilde feels you have to align big data to make sense of it.

Brian Otten stated he thought, “it was just data you couldn’t put in a regular database, so, you have to have a whole new set of solutions, such as Hadoop, along with new sets of technology.”

“Data is everywhere, all at once, constantly feeding new events into it.” Eyal Sivan

For Eyal Sivan, “the reason everybody needs all this Hadoop unstructured is that it’s a different way of relating to data because it’s so big!”

For anyone in the banking or cryptocurrency world, you may have heard the word Blockchain. In simplistic terms, it’s a specific type of database. The difference is it stores data differently from other types because it’s stored in blocks.

Sounding off on Blockchain

Emmanuel Methivier reminisced about the time the head of the biggest European bank called him and said, “I forbid you to talk about Blockchain!” Clearly, Blockchain has its supporters and detractors.

Erik Wilde noted, “If you want your transactions to be slow and expensive, move to Blockchain.”

“It’s a distributed agreement on truth. You don’t want to use it if you don’t need it.” Eric Horesnyi

Referring to his days at Barclays and Bank of America, Brian Otten said, “it’s a real cost saving for trade matching and trade breaks.”

Eyal Sivan makes a good point: “If you want to have philosophical conversations about agreements, then Blockchain is the way to go.”

These days, companies want to know how to change pronto, according to Erik Wilde. The reality is “Digital Transformation is a new way of existing and your company will exist like this for the rest of its existence.”

This is the hard part for organizations, it’s not something you just do and then continue along as you did before.

For Eyal, “Digital Transformation is like a diet, you can’t go back to eating hamburgers and French fries afterwards, you have to eat healthily.”

“You don’t want to do a Yo-Yo transformation.” Erik Wilde

“Digital Transformation is an adaptation to a new era that you have to go through to go forward,” noted Eric Horesnyi.

Brian Otten says when he thinks about Digital Transformation, he “considers companies that are not natively digital.”

“It’s not only about the way you operate, but how you do it as an organization.” Brian Otten

Make no mistake, “You’re in for a rude awakening if you just outsource everything to specialist teams to get things grafted to new technology and expect Digital Transformation to just happen overnight,” says Eyal.

You have to look deep into your organization to see where technology and your teams can function to achieve real Digital Transformation for the long haul.

Schedule an appointment with one of our expert Catalysts to discover Digital Transformation at its best for your organization.