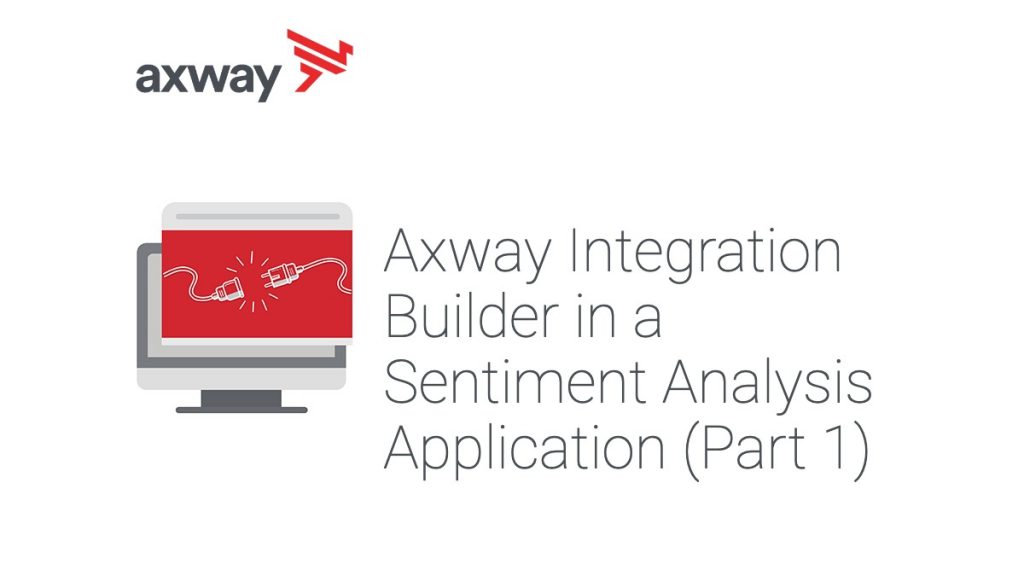 Sentiment analysis (also known as opinion mining or emotion AI) refers to the use of natural language processing, text analysis, computational linguistics, and biometrics to identify systematically, extract, quantify and study affective states and subjective information. Sentiment analysis is widely applied to voice of the customer materials such as reviews and survey responses, online and social media, and healthcare materials for applications that range from marketing to customer service to clinical medicine.

We’ll use Integration Builder to extract the text from our data source, make a call to Amazon Comprehend natural language processing (NLP) service, through API Builder, to determine the sentiment and send a notification to the appropriate stakeholder.

This will give the stakeholder a means to be proactively aware of negative sentiment and take immediate corrective action instead of waiting for the data to be analyzed manually.

The diagram below illustrates the flow of data:

Note that information in the notification contains the sentiment, the answer to the question, the form name and id and the token corresponding to the particular response

In this section, we’ll create a Typeform NPS Survey.

You can review the Typeform Help Center for help on how to create a survey.

I created a simple NPS Survey made up of two questions as shown below:

As you are creating your form, note the form id in the URL as shown below:

Note that my form has a form id of QsM3CQ. We will use this in our flow to make sure we are processing the correct form.

For our NPS Survey, we are mainly concerned about the second question, “What is the primary reason for your score?” since that is where the user may express their sentiment. When our Integration Builder flow parses the survey data we will look for the second question. Typeform enables you to assign a unique name to the question to make the coding easier as shown below:

Note that I named the question ref sentimentQuestion. We’ll see this later when we look our Integration Builder flow.

The webhook is the AMPLIFY Central API corresponding to my Integration Builder manually triggered flow.

We can test our survey and webhook by using a service like pipedream’s requestbin, a modern request bin to inspect HTTP events and see what is posted, as shown below:

Note the question ref sentimentQuestion at the bottom of the response. We will parse the response for that answer in our Integration Builder flow.

At this point, we’re done with building our Typeform NPS Survey. We’ll have to come back later and set up the webhook URL but for now we can move onto API Builder.

In this section, we’ll create an API Builder microservice that will expose the AWS Comprehend sentiment service.

Follow this blog post to create your API Builder project but instead of using the AWS Comprehend detectDominantLanguage service, use the detectSentiment service as shown below:

Note that we are assuming that the language is english in our API above. Instead we could have used the AWS Comprehend language detection service described here and then called the detectSentiment service with the proper language

Test your API and when you are satisfied that it’s working properly, you can follow the instructions here to create a Docker image and deploy in any docker platform or to publish to the Axway’s platform runtime service, ARS.

The swagger for your microservice is accessible from /apidoc/swagger.json. If you used ARS, then it looks similar to following:

Paste the swagger contents into a swagger.json file on your computer. We’ll use this later when we create an Integration Builder connector to this microservice.

In this section we’ll create our Integration Builder flow and create a connector for the API Builder microservice. You can download the flow here.

Here is what we will do:

The resulting flow is shown below:

Create a connector to our API Builder microservice

Follow this blog post to create a connector to the API Builder microservice you published above. I called mine Detect Sentiment. Test your connector in the API Docs:

Follow the instructions here to create a manually triggered flow. I called mine NPS Sentiment Notifier.

I created the following flow variables:

Make sure the flow is processing the correct survey

Add a JS Filter step, shouldProcess, to the output of the trigger. The contents are as follows:

The javascript above performs the following:

We’ll use a Connector API Request step to call the API Builder sentiment API. First we use a JS Script step called prepareGetSentiment to calculate the query parameters as follows:

The Connector API Request step, getSentiment, is shown below:

Add a JS Filter step, shouldNotify, to check if the sentiment response is negative or mixed as follows:

Send a notification to MS Teams

If the sentiment is negative or mixed, we’ll send a notification to MS Teams.

We’ll use an HTTP Request step to send a notification to MS Teams via a webhook. First, we use a JS Script step called prepareNotifyTeams to calculate the body as follows:

The HTTP Request step, notifyTeams, is shown below:

Create an instance of the flow

Create a flow instance and attach the API Builder Detect Sentiment connector and enter the other variables for your Typeform survey and MS Teams webhook:

Follow the instructions here to get your flow’s API in AMPLIFY Central. This is the webhook you’ll enter in your Typeform survey.

Fill out your survey and enter a negative sentiment: “Terrible support”. You should get a notification in MS Teams as follows:

In this blog post we saw how Integration Builder and API Builder can be used together with AWS Comprehend Natural Language Processing service to implement a sentiment analysis application to alert marketing via MS Teams. This enables a company to be more proactive in analyzing Net Promoter Score survey responses.