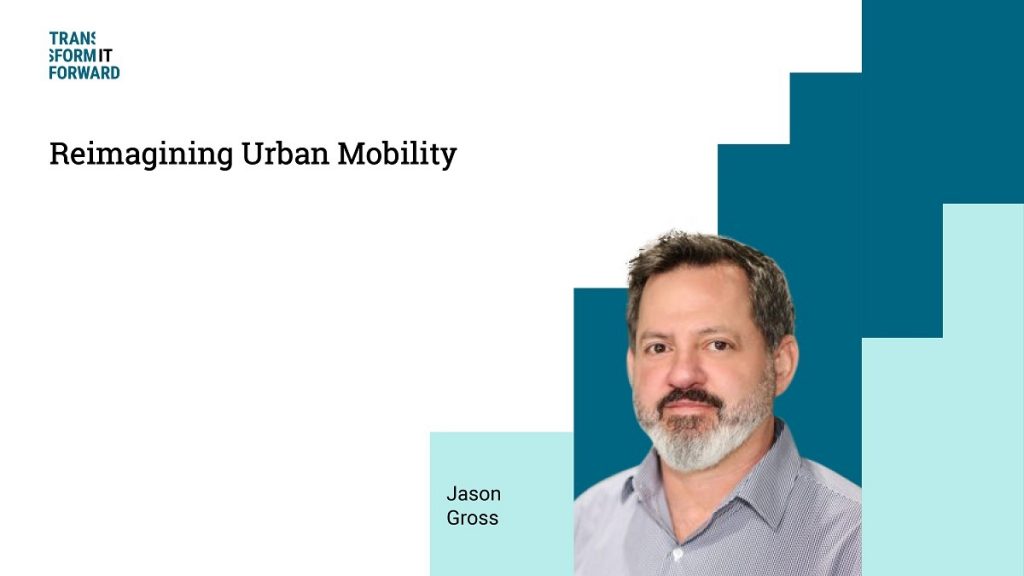 It’s no secret that ridesharing companies like Uber and Lyft have significantly disrupted the transportation industry — in more ways than one. By making use of customer-centric technology and aggregating supply, these apps have raised the bar for the taxi industry as a whole, and increased competition tenfold.

But contrary to popular belief, ridesharing apps didn’t completely decimate the industry. By carving out a unique niche within the taxi landscape, companies like Curb are reimagining urban mobility altogether.

Transform It Forward with Jason Gross: Moving the meter in the taxi industry

In the latest episode of Transform It Forward, I sat down with Jason Gross, the Vice President of Mobile at Curb.

With a driver-first approach to ride-hailing, Curb is bringing upfront pricing to the largest nationwide network of taxis and licensed for-hire vehicles.

The company provides unparalleled transparency to riders and drivers alike, facilitating billions of dollars in payment transactions annually through its open mobility platform.

During our discussion, Jason and I covered innovation in the taxi industry, the benefits of using taxis over services like Uber or Lyft, and how Curb is working to meet its profitability goals.

Tech and the taxi industry

Historically, the taxi industry was relatively behind in terms of technology, prior to ridesharing apps like Uber coming on the scene. Although the technology was beginning to evolve with new dispatch software and credit card processing tools, Jason noted that the missing piece for the industry was a way to aggregate supply.

Ridesharing apps fulfilled this need, ultimately providing people with an alternative option that was much more customer-centric. This blindsided the taxi industry, forcing them to reevaluate the technologies they had been using up until that point.

“I think what the industry failed to foresee was that there would ostensibly be other options. There would be something that would provide users with an ability to book from a much larger pool of vehicles and actually track where the vehicle was, rather than having to call that phone number back and say, ‘hey, my vehicle’s late, when’s it going to be here?’ I think there were a couple of things that caught the industry off-guard.”

In addition to making use of more innovative technology than the taxi industry, ridesharing apps gave themselves a competitive edge early on by finding ways to circumvent the regulations. As Jason mentioned, ridesharing apps were going “wild west” in the market, not only by taking an aggressive approach to building the business, but essentially by not taking no for an answer.

How were the ridesharing companies able to do this? To start, they used the power of social media, engaged in intensive lobbying, and leveraged large amounts of venture capital to gain an economic advantage over the taxi companies.

“At the end of the day, they could unleash this force of massive social media-enabled lobbying in effect to cow the regulators and the city administrators. And if the city didn’t bow to that sort of new way of doing business, they would go to the state. And if it wasn’t the state, they would go somewhere else. And so, they were very, not just aggressive, but unwilling to stop. It was really a take-no-prisoners approach to building a business.”

Ridesharing apps were offering customers lower prices, more accountability, and greater transparency since users could track where their ride was on the app’s interactive map. Jason noted that being able to see the car on the map created a level of comfort and control that users simply didn’t have with taxis.

All of this combined meant that the apps had the customer on their side, which was an essential component of overtaking the taxi industry completely.

“They really created enough differentiation in what the customer experience was to make people wake up and say, ‘hey, why wouldn’t I want a taxi ride for half the price and have it here in five minutes and see where it is the whole way to and from?’ I think some of that capability of seeing it on a map created some level of comfort that you were in control of that experience. “

The drive to change

When ridesharing companies came onto the scene, the taxi industry was essentially forced into giving it a facelift. Instead of being decimated completely, the taxi industry needed to come to grips with sharing the pie with major competitors, which ultimately caused them to change in positive ways.

Jason noted that the advent of ridesharing companies caused the taxi industry to change in a few different ways.

Jason says that for Curb, success became a matter of identifying the niche areas where taxis could dominate, like government or healthcare sector rides.

“What we were able to do was look at the areas of the market where taxis were an under-leveraged piece of the transportation infrastructure, make those connections, and really just give drivers rides, which they completed with all the other technology that we had long been giving them. But we took this quantum leap into saying we have a role to play in creating demand for the industry, and that was a hole that no one was filling or not filling successfully.”

These niche areas that Curb zeroed in on also included transporting people with disabilities, as wheelchair-accessible vehicles are generally not as common among rideshare drivers.

Overall, there’s room for both ridesharing apps and taxis within the transportation landscape. According to Jason, it’s simply a matter of finding the appropriate use cases for both and ensuring all options are available to the consumer.