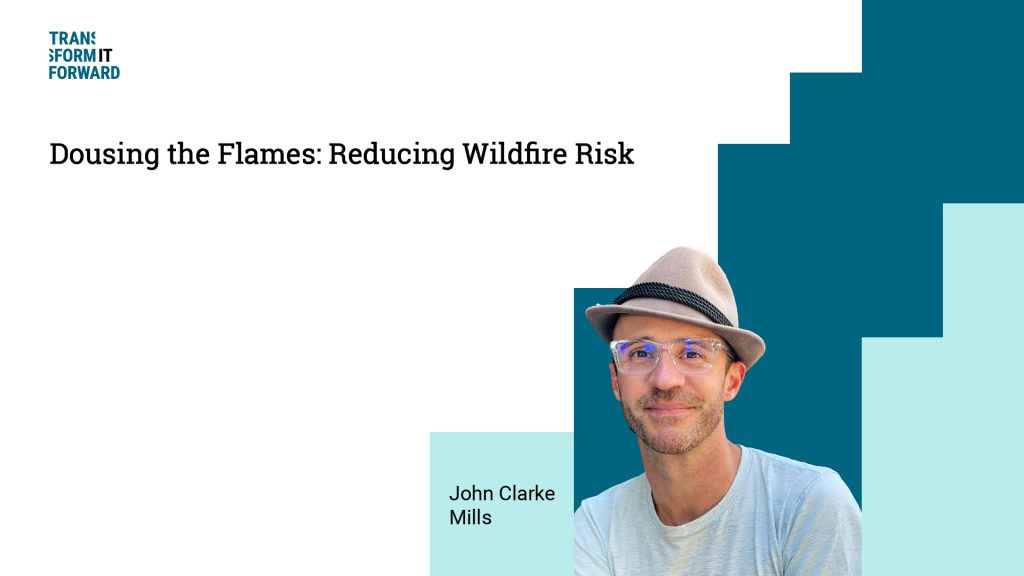 Most entrepreneurs will agree that the best ideas are born out of a genuine need to solve a problem. Necessity is the mother of invention, and if you’re facing a challenge, there’s a good chance there are others who have encountered the same issue.

For John Clarke Mills, CEO and Co-Founder of Watch Duty, it was the need for more information about the wildfires that were raging around the ranch he had just bought in Sonoma County, California. It was this pain point that led him to launch the company, which is operated by experienced fire reporters and many other collaborators who diligently monitor radio scanners and other data sources 24 hours a day to keep people updated in real time.

We dove more into the behind-the-scenes of the app and how the grassroots fire reporting team created the platform in our interview with the team this summer, read it here.

In the most recent episode of Transform It Forward, I sat down with John to pick his brain on Watch Duty, how it works, and the company’s plans for the future. We discussed everything from how to keep an edge against the competition to finding your purpose in life, so I hope you’ll take the time to listen to the full episode.

For humans, by humans

To kick off our conversation, John shared a bit more information about the vision and mission behind Watch Duty, and how the company is setting itself apart from the competition.

He explained that rather than trying to replace the work of human beings through tech, the company is relying on the know-how of experienced professionals to help provide the public with real-time information about natural disasters like wildfires.

“Every year there’s another app, another idea, and everyone is taking a swing at it. They’re just not hitting the mark. What we came to realize was that the best way to solve this problem is to use human beings, not to try and replace them. And so that was the big win for us, was that ultimately everyone’s trying to use the data sources from satellites, from Cal Fire, whatever it may be. But those are very slow to update, very static, and they do not give you a real time picture of what’s going on… So, it’s crowdsourced, but the same way that Reddit is crowdsourced, so there’s a moderator. There’s not just random human beings posting random stuff… This is done by professionals.”

While he was building Watch Duty, John knew he wouldn’t need to reinvent the wheel. Instead, he observed the people who were already performing the function he wanted, then recruited them to be part of his community.

“I’m a product-based entrepreneur. Although I’m an engineer, I study what people do. So I didn’t do anything new—I found people who were already doing it. So it was about finding them, building a community around them, and giving them the tools. We built them a Slack network with bots and other infrastructure to allow them to talk with each other, listen to real-time intelligence on radio communication channels… So that’s what those folks are doing. They’re listening and disseminating knowledge that they’re hearing on radio channels.”

That way, building the product became a networking and community building exercise, rather than a process that would be overly complex and burdensome.

“You convince one who convinces the next one to convince the next one, and then once you get the most famous person on board, then everyone else comes and follows suit. It’s a network effect internally between these radio reporters who listen to each other anyway.”

John’s careful planning and strategizing effectively paid off. Within a day or two of launching, Watch Duty was already boasting 22,000 users and today they’re hovering around a quarter million.

One of the major benefits the product offers to users is the speed with which they can access real-time information. By contrast, very often, government-issued information and announcements can be relatively slow off the mark and overly vague.

“The challenge is that in a modern world, people want more information. So sending out an evacuation order an hour into a fire that’s blowing really fast doesn’t make people feel very good. They don’t even really tell you, ‘hey, you should probably go east or go west.’ Like, where is this thing? I don’t even know which way to leave. So it’s not exactly the way that people want to consume this information.”

John believes that this is a problem that requires a holistic, top-down approach. He stressed the importance of collaboration and cooperation, especially when it comes to natural disasters, which rarely have regard for human-created borders and boundaries.

“Fire doesn’t care about borders or boundaries or fire departments or municipalities, but governments do. So it’s really challenging for them to imagine them working together well enough to build a cohesive product like we have built.”

Patience is a virtue

In the future, John and the team at Watch Duty are eager to continue building and scaling the product, but they know the process of expanding will require careful consideration, thoroughness and patience.

The company is building from west to east, so John says they’re first prioritizing the states that are facing issues with wildfires like Oregon, Washington, Nevada, Idaho, Arizona and New Mexico before expanding east.

“We’re very focused on fixing our challenges locally and then scaling out globally. But we have to be patient to do this. So it’s not for lack of desire. It is, ‘let’s do the right thing and let’s be patient.’ This is not a move fast and break things situation.”

Overall, what keeps John motivated is knowing that he’s serving a greater purpose through his work. He reminds us of why it’s important to stay committed to a sense of purpose while remaining open about the exact form it will take in the future.

“There is no end, right? This is just the beginning. This is what I’m here to do. My purpose was to use technology to help change the world. I just didn’t know it was going to be in wildfires and natural disasters.”

Listen to the full podcast episode here and subscribe for updates wherever you get your podcasts.