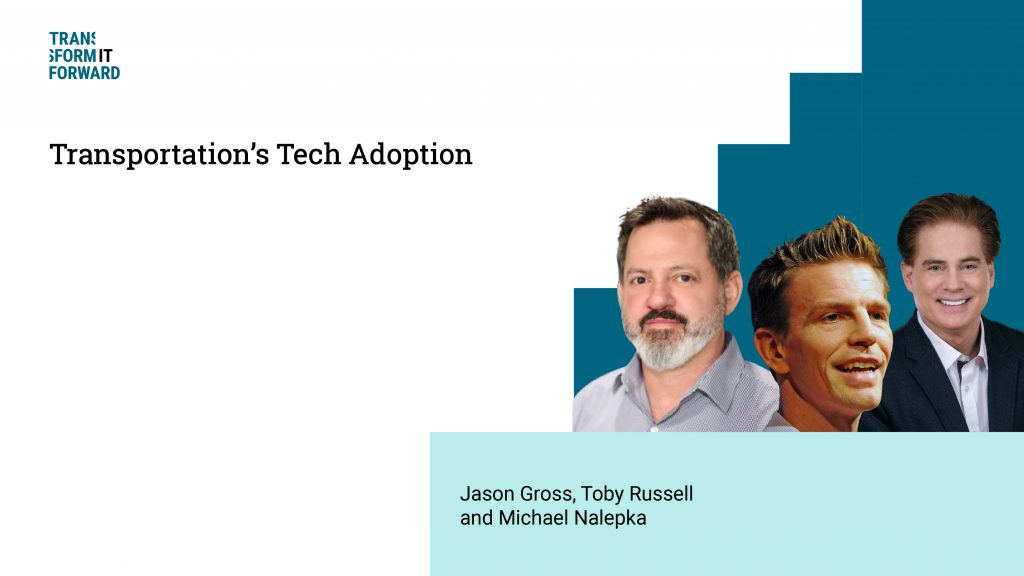 So far in the Transform It Forward podcast series, we’ve heard from experts from a wide variety of industries including events, technology, and real estate. Now, with so many episodes under our belt, some key themes are beginning to emerge, so it’s time to take a step back and connect the dots.

In the most recent episode of Transform It Forward, we tried something a little different. For the next few episodes in the series, I’ll be taking a look back at some key clips from past interviews that share common elements, or discuss similar industries.

First up, we’re taking a look at the transportation industry and how it’s evolved in recent years thanks to new and innovative technologies. Over the past year or so I’ve spoken to three guys who really know their stuff when it comes to the transportation industry: Jason Gross, the Vice President of Mobile at Curb, Michael Nalepka, the General Manager of VideoProtects at J.J. Keller, and Toby Russell, the Co-Founder, Board-Director and Strategic Advisor at Shift.

Each of these interviews taught me something new about the transportation industry, how it’s changed and where it’s headed next. Let’s review some of the key takeaways and common threads from each one.

Out with the old

A few months ago, I had a chance to sit down with Jason Gross, the Vice President of Mobile at Curb, a company that’s taking a driver-first approach to ride-hailing. During our chat, Jason explained how the company is providing unparalleled transparency to riders and drivers alike, and facilitating billions of dollars in payment transactions annually through its open mobility platform.

Jason gave us an overview of the evolution of the taxi and ridesharing industry in recent years, explaining how technology has changed the game completely. As with many other industries we’ve looked at on the show, the technology used in the transportation industry has come a long way in just a few short decades.

“It started with radio calls…and it really was very manual. Beyond that, the use of technology was very limited. It was really kind of hand-to-hand combat in terms of fulfilling rides.”

Just as new innovations have changed the face of the taxi industry forever, technology has also contributed to a major changing of the guard in the trucking industry. Last year, I sat down with Michael Nalepka, the General Manager of VideoProtects at J.J. Keller, a company that provides businesses with expertise in safety and regulatory compliance.

Over the past few decades, the trucking industry has also come a long way in terms of technology. But as Michael pointed out, the evolution was rapidly accelerated due to the pandemic.

“Technology has come so far now today, that even a small trucking company can compete against the large fleets because technology has gotten to be so powerful and a lot of it is not expensive anymore, so it levels the playing field… Technology is driving that forward. It’s making it faster, cheaper, better and there’s a lot of robust competition in many of these areas.”

Many parallels can be drawn between the taxi industry and the trucking world in terms of tech adoption. Both of these sectors have been forced to evolve quickly. In other words, they’ve had to get with the times or risk losing out to the competition.

Most recently, I had a chance to sit down with Toby Russell, the Co-Founder, Board-Director and Strategic Advisor at Shift. The company is on a mission to simplify the process of buying and selling used cars through its a peer-to-peer platform that allows people to share information about the car they’re selling in real time.

Like Jason and Michael, Toby had a keen awareness of the things that needed to change in the used car space, which helped him and the team at Shift understand the transformations they would need to set in motion to create a more consumer-friendly industry.

“We came to the realization that the place we could create value and allow people to get great vehicles at a reasonable price was in the used space… One of the things that we believe people would want to be able to do is test drive the car, so we created a novel solution for online shopping to offline purchase… The net of it is better products, better access and a better experience that was built around you.”

In with the new

As we know, Silicon Valley giants like Uber have revolutionized the transportation industry—and quite frankly, the world as we know it—in more ways than one. Jason offered his perspective on exactly how ridesharing companies in general have changed the game for good.

“I think what ridesharing did was a couple of things: they brought the base level of quality of service up so drivers and fleets needed to invest further than they had in making sure the customer experience was on par with what they had come to expect… But on top of that, they had this sort of fragmented technology, so they needed to have a platform that integrated across these various technologies and aggregated the supply to create that. I think a lot of things have aligned.”

Similar to the ridesharing business, the trucking industry was in need of a revamp prior to the pandemic, and technology came to save the day once again. At J.J. Keller, they rely on cutting-edge technology to ensure their compliance information is up-to-date for fleets of all sizes across the country.

During our conversation, Michael explained some of the ways in which new technologies have emerged to create a stronger, better, and faster industry.

“Technology is consistently on a regular basis dialing up. We are the largest safety and compliance organization for transportation in North America… So fleets look to us to tell them what’s the latest and greatest. It’s our job to make sure that they are in compliance and being safe on the road.”

Putting it into practice

Increasingly, the lines are beginning to blur between tech companies and other brands. With the rapid pace of tech evolution, all companies regardless of their industry are now expected to specialize in technology and remain on the cutting edge of the changes—or risk dying out.

Michael illustrated this concept well when he explained the challenge of driver turnover in the trucking industry. And why technology became a critical component of retaining quality drivers helping to keep the industry healthy.

“The trucking industry still has a massive turnover problem with drivers… That’s the challenge for fleets today is the retention question. There are a number of methods to retain them, and that kind of overlaps into the whole video category, which is my particular area of expertise…In fact, if a fleet today doesn’t have a forward-facing video camera recording system on their large trucks, they are one accident away from a nuclear lawsuit.”

When it comes to the taxi and ridesharing industry, Jason believes a little creativity and collaboration will be necessary to create an ecosystem that benefits everyone in the future.

“I think there are places where taxis and rideshares can work together. At the end of the day, the customer needs transportation and we’re available in some of these multi-modal apps—one of them is called Transit. There are a few others that we’re working with, but they allow people to plan their transportation and segment it out between a bus to a bus stop and from the bus stop in a taxi to an office or vice versa…I think with the advent of technology in the taxi industry as well, you’ll see a lot more interesting combinations of use cases for a driver over the course of a day or a week.”

All three of these conversations serve as excellent reminders of some of the key ingredients that go into a successful transformation—regardless of the industry we’re talking about. Although they each focused on a different element of the transportation industry—taxis, trucking and used cars—some common themes have emerged:

Catch up on previous episodes and subscribe for updates wherever you get your podcasts.