Home Developer The Mobile Appification of the Enterprise: Thoughts from Web Summit 2014 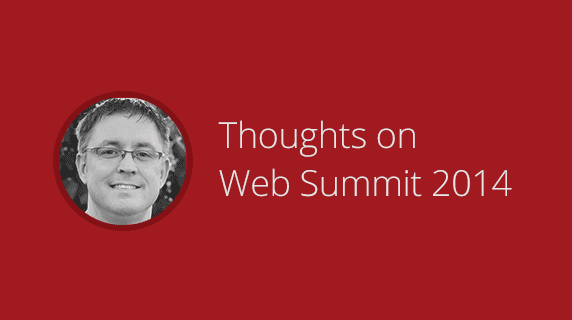 Bono. Guinness. Mobile. That’s how I spent my days at the Dublin Web Summit along with 22,000 others. A total whirlwind, but what an event. I was there to offer up the mobile perspective in three different arenas. Not surprising, the concept of “mobile replacing the web” was hardly an elephant in any room there, but it’s also clear that for enterprise mobility, we’re still at Day One.
My first session – a roundtable entitled “Mobile: Just a New Flavor of the Week?” – gave the chance to hear from a diverse group of startups, ISVs and creative agencies about their mobile journeys. Most have moved beyond the web/hybrid/native debates – they seemed to agree that it’s a matter of “and” not “or” – and there was consensus that mobile is more than just another digital channel. For example, one participant mentioned Tesco, which has been struggling because users increasingly expect premium experiences both in-store and via an app (increasingly the preferred means for shopping, at least for certain staples). Optimizing the store experience is of course what they’re built to do, but optimizing the mobile experience is a different animal altogether.
The next morning, I joined Lookout Founder Jeff Mahaffey and FeedHenry CEO Cathal McGloin, along with a Bloomberg’s Caroline Hyde for a panel conversation entitled “The Appification of the Enterprise”. The conversation looked into an interesting disconnect: despite mobile being one of the most talked about, blogged about and spoken about topics out there, there are too many companies still convinced it’s just another “trend.” This may explain why many enterprises remain mobile laggards – more than a few IT leaders, confronted with the blizzard of new terms and shifting stacks, are choosing simple denial.
We all agreed that the security and privacy concerns they’ve dealt with in adopting cloud has put a bad taste in their mouths and caused them to be reluctant with mobile. In the meantime, the lines of business have come in and taken over the mobile agenda. Someone commented that it almost seems as though this has taken the pressure off IT – which isn’t necessarily a good thing , at least not if you care about IT’s future relevance. (Our recent study with IDC would support this opacity around roles and responsibilities, too.)
My final session was a keynote: “Mobile and the Experience Economy”. It built (I hope) on the previous sessions, speaking to the way mobile has entirely rewired user expectations. Mobile has all but dissolved the conventional distinctions of business-to-employee (B2E), business-to-business (B2B) and business-to-consumer (B2C). There’s only what we call “business-to-user”: B2U. Now the onus is on companies to orient their offerings around the users’ needs and to implement mobile strategies that delight them.