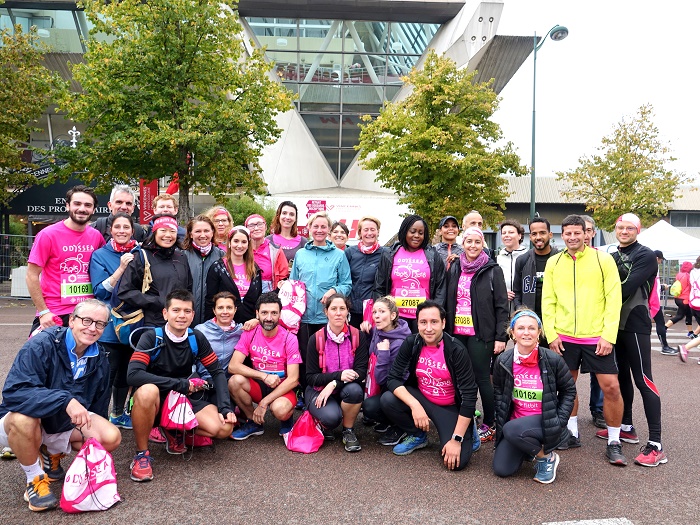 Recognized as the first month of the fall season, October is also internationally known as the “Breast Cancer Awareness Month.” Since the adoption of wearing a pink ribbon by breast cancer survivors back in the 90s in the New York marathon, as well as the subsequent formation of a charity which aims to give 90% of the money it raises to support scientific research and public awareness of the disease, millions of dollars (euros) have been donated to the cause. The New York-based charity “Pink Ribbon Inc.” promotes Breast Cancer Awareness Month where like-minded, affiliated international groups participate in fundraising using the pink ribbon motif. The sponsors are encouraged to use the pink theme and it’s not unusual to see municipal fountains gushing with suitably colored displays. In France, several races are organized in support of this cause and the most widely known is the Odyssea race.

Odyssea is a caritative race that was created in 2002 which takes place in 13 cities all over France to create awareness and support research against breast cancer. Almost the entire amount of subscription given to Gustave Roussy is one of the world’s leading cancer-research institutes and the premier European Cancer Centre. It is a center for patient care, research and teaching, as well as patients with all types of cancer can be treated at this facility.

This was the first participation of Axway’s team in Odyssea, as well as Axway aligned a mixed team in this race. For its first time out, the Axway team in the 10K race arrived in 24th place out of 118 teams (the women’s team arrived 27th out of 78 teams and the men’s team, 19 out of 78 teams). A win-win for Axway.

This wasn’t the first time when an Axway team engaged support for research against breast cancer. For the past five years, Axway supported La Parisienne, a 6.7 km women’s run race which was an opportunity to attract people that were not used to run.

Besides the solidarity aspect of this initiative, participating in Odyssea is also a team collaboration. To prepare for Odyssea, Axwegians did training during their lunch break and even decided to participate in other races.

The collected funds reached 520 000 euros for the Paris edition only. A huge success all around!

Learn more about Axway and their products here.