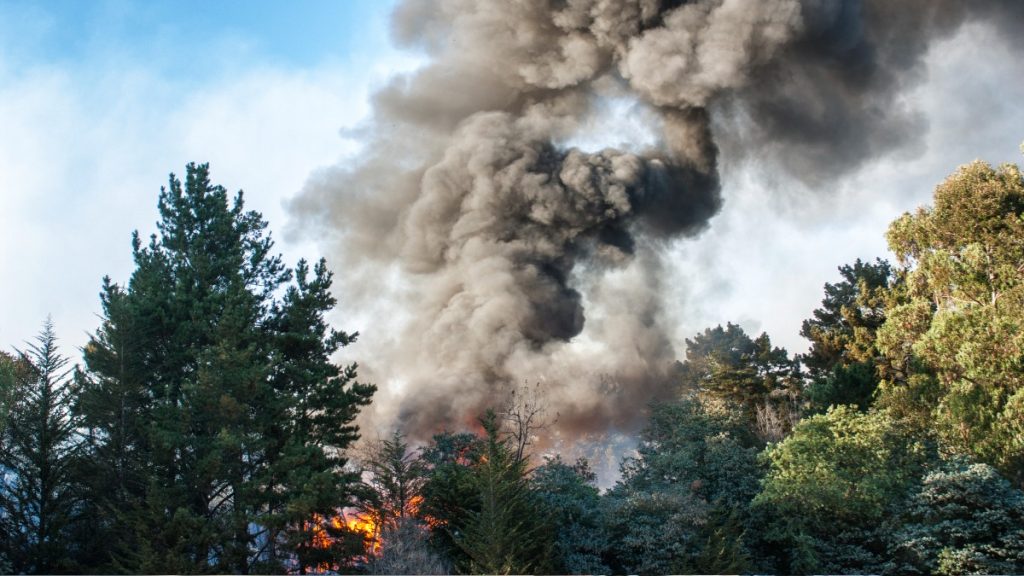 We speak often of the power of platforms here at Axway, and for good reason: the right platform can be transformative, bringing people together and extending their efforts exponentially. When one of our own, Shannon Mahorney, began volunteering as a California fire reporter for Watch Duty, we wanted to learn more about this grassroots effort to get wildfire information out to people more efficiently – and the app they built to do it.

Watch Duty is a volunteer team of skilled radio operators, firefighters, and citizen information officers who provide up-to-the-minute information pushed directly to mobile so people can discover and track wildfire hazards in real time. As of the non-profit’s one-year anniversary, 250,000 people had downloaded the app, and fire reporters have reported on over 730 fires, sending almost 20 million push notifications.

We spoke to CEO John Mills and team members Sara Paul and Josh Leone about how they’ve built an app that brings together a community and why Watch Duty volunteers devote so much of their personal time and energy to this work.

Life in the California countryside can be idyllic – acres of hills, forests, and hiking trails, beautiful weather, and peace and quiet. It can also be incredibly dangerous during wildfire season. In recent years, a warming planet, regional super drought, and seasonal thunderstorms have made for an increasingly volatile situation. Those who live in the path of wildfires have learned to live on high alert in the late summer months.

In 2020, the Walbridge Fire burned over 55,000 acres, destroying 156 homes in northwestern Sonoma County. John Mills’ home was spared, but it was close, and the experience marked him.

At the time, Mills was frustrated by how hard it was to get accurate, up-to-date, and relevant information on how the fire was moving. Evacuation notices would change by the hour, different agencies reported information in disparate ways. But in a wildfire, timing is everything.

Contextualizing information with a platform

A technologist by trade, Mills started getting involved in wildfire training and consulted on radio communications and mapping efforts. He was quickly adopted into a grassroots community of citizen fire reporters.

That’s when Mills realized he could make his highest contribution by building a platform that would bring all those efforts together, giving people information they needed, when they needed it.

Many people were already running their own efforts to disseminate information, monitoring emergency radios, running local social media pages, and updating people on evacuation notices. The problem was that these accounts were dependent on existing platforms and algorithms – and they could be hard to sift through.

The team wanted to band together, and they knew they needed to be able to cut the noise and report the most relevant information. The sweet spot:

So that’s what they built.

“We were able to get off on the right foot quickly because we knew what didn’t work,” says Josh Leone, a long-time weather watcher who’s also a software integration expert.

“What wasn’t working was technology only – there are a thousand apps out there that will throw a little fire logo on a map and say, ‘here’s a fire.’ And conversely, you had too many people talking amongst themselves on ‘Fire Twitter’ and ‘Fire Facebook’,” says Leone.

“There was too much false information, too many “praying for you” posts, scrolling through a newsfeed to try to figure out if you need to evacuate or not. We knew it had to be right in the middle.”

“Because you cannot put comments in the app, all the important information is right there in front of you. It’s not buried amongst other people’s commentary, which is what we get on the social media pages and requires a lot of time and management,” explains Sara Paul, who’s been running a Facebook page for Sonoma County Fire updates since 2017.

“If it puts my page out of business, that’s fantastic,” she laughs.

The importance of user experience

“It’s really quite simple,” says Mills, “There’s nothing magical about this app. The best products don’t have magic – people think they do, but they don’t. Our job was to make the simplest thing possible so that a little old lady can use it as easily as a tech savvy kid.”

The app displays a map with near-real-time wildfire tracking as well as a newsfeed with relevant updates, and it can push notifications to update users on evacuation notices.

The basic data it aggregates was already freely available: fire watchers were pulling information from public channels like police and fire scanners, satellite data, fixed and aerial photography, and more. The missing link was bringing all that information together, in a context that made sense for people.

“We were all trying to do this with social media, and we were fortunate that we all kind of found each other and realized hey, we should band together and consolidate our reporting, make sure that everyone’s getting covered,” says Leone.

“I’m always shocked at how fast and nimble our development team is, because if you ask for something you might get it within an hour or the next day. It’s shocking considering it’s a bunch of volunteers! But we’re all in this together and people recognize how important it is to get this right,” Paul says.

A smooth user experience was especially important when timing is everything. Some features include:

Once the team built the app, it spread like – well, wildfire. Mills says they didn’t need to advertise online or promote the app because team members already had large communities on Facebook and Twitter.

“When people found out that these fire reporters they already trust are going to be on a new platform built just for this purpose,” Mills explains, “it kind of did its job by doing the right thing,” says Mills. “That was our mission.”

From there, word-of-mouth did the rest. “All it takes is one fire that starts to get reported and people realize ‘wow, this is leaps and bounds above anything else.’ It gives them a direct notification of exactly what they need to know,” adds Leone. “We went from zero to tens of thousands of downloads extremely fast.”

Working together, opening up information

As an integration company, we couldn’t help but nerd out a bit about the role of APIs in the Watch Duty team’s work.

As mentioned above, the app pulls data from a number of sources. For example, it displays the perimeter of larger fires by pulling GIS data from Cal Fire, and it leverages ESRI mapping information, satellite data, and weather layers such as wind speeds.

But the interesting part, Mills says, is that fire reporters on Watch Duty are generating their own valuable data: real-time information about fire behavior and activity.

Here’s how it works: when they’re on duty, fire reporters monitor emergency scanners (either locally with a physical radio – Leone has an eight-foot antenna installed on his roof – or with software scanners online) as well as the state’s wildfire camera network and flight radars. In some places, such as Siskiyou County, the US Forest Service has manned lookout towers that provide eyes in the sky and report “smokes” in real time, which Watch Duty volunteers can monitor over scanners.

Another rich source of information is the users themselves: from residents to wildlife photographers or firefighters with boots on the ground, people can report back and snap a picture of the situation, which is geolocated and then approved by moderators. It’s very much a team effort, Leone says.

“One of our guys in Lake County has a fire in his backyard all the time. He’s a wildfire photographer, so he goes to the fire and jumps in the middle of it and runs around freeing dogs! And we have to cover him when he’s doing that. It’s a little bit of everything, and we do a pretty good job, I would say, of collaborating and then doling out different jobs to different people as needed on the fly.”

“We use Slack in a very different manner than any other organization,” Paul adds. “It is nonstop. I don’t even know how many channels we’ve got going at the moment, but it is a very, very active situation.”

All of this helps paint a detailed picture of what is happening, and the team created a developer API to make it available to others. Mills says they’re in talks with a wine producer who wants to incorporate it into maps for their own fire department.

“It is very much a part of our strategy, but it’s a byproduct of the work the reporters are doing,” says Mills. “This is valuable information, and we’re hoping to help others through our API.”

Watch Duty is a 501(c)(3) organization, born out of a very personal desire to build a safer community. The organization’s team members and fire reporters felt the communication systems and information available to the public weren’t keeping up with the accelerating danger.

They say their team effort is already making a difference in people’s lives, as Watch Duty gets crucial information out quickly and in a way that’s easier to understand.

“I would say 90% of the emails we get are messages like, ‘I suffer from PTSD. This helps me feel safe’,” says Leone. “They’re not support-related, and I think it’s because the product we’ve already put out is so far superior to everything else. It’s just a breath of fresh air for all of us going through this.”

Leone is virtually neighbors with Mills, and also nearly lost his home to the Walbridge fire. “That was a big reason I wanted to be a part of the project,” he explains. “I suffered through it when fire was three feet behind my home, Sara’s been evacuated half a dozen times. It was very personal for us, so we just built features that we knew we needed.”

“I became a fire reporter because I had a stroke five years ago,” explains Paul. “I was sitting on my couch, unable to go back to work, and I was desperate to help. The Tubbs fire came sweeping through Santa Rosa and my friends were evacuated. Many of them lost their homes. But they didn’t know where to go, that information was not out there. That’s what got me into this.”

Axway’s Shannon Mahorney has been on both sides of the need for accurate and immediate fire information: she ran a Facebook group for many years in a county that had no other timely news source until Watch Duty expanded to cover all of California in June. And she has needed it when fire and evacuations impacted her and her family.

“Watch Duty is the intersection of technology like APIs and people who are dedicated to helping their communities stay safe,” says Mahorney. “It’s an honor to be part of it.”

Their work continues today: Mills says the app is already accomplishing more than they thought it would. Now, the team hopes to continue to expand to more states and eventually other countries.

“There will be more disasters,” says Mills. “It’s just a matter of time. It’s not if, it’s when. So we’re going to keep going.”