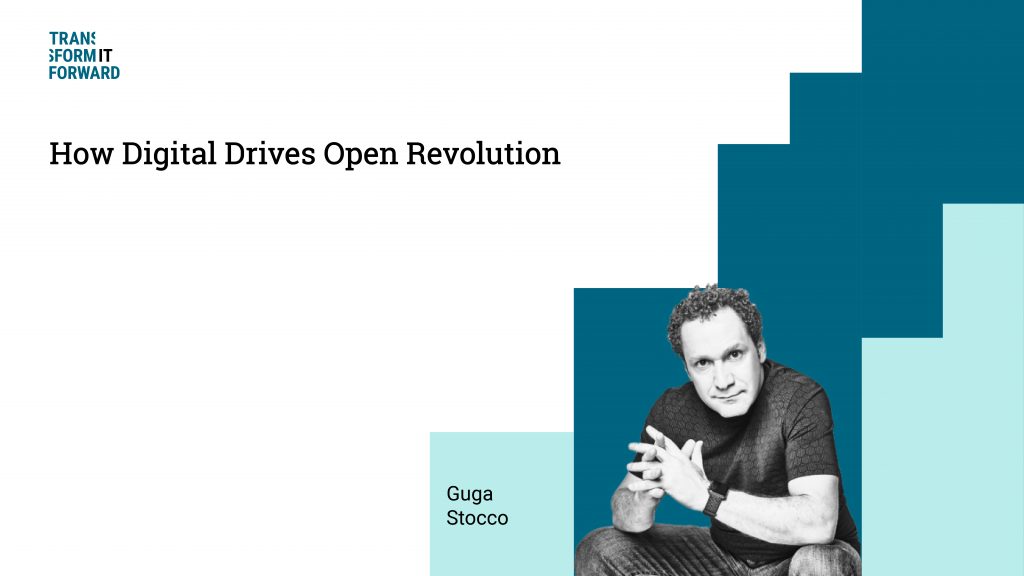 Innovation. It’s a word that’s often thrown around in corporate settings today. But who are the key players that are actually driving change forward in industries like tech, finance and advertising?

In the latest episode of Transform It Forward, I sat down with one of the creative leaders and entrepreneurs helping to drive transformation across industries today.

As the co-founder of Futurum Capital, Guga Stocco has more than 20 years of experience in building up digital businesses and leading corporate transformations. In his career, he’s touched digital banking, startup investments, e-commerce and more, and he’s just getting started.

We had a fascinating discussion on AI, open banking, and how technology is driving industry transformations overall.

Technology is a tool

After more than two decades working at the forefront of the technological revolution, Guga noted that one of the most common mistakes he sees people make is operating under the assumption that technology is the be-all, end-all, when really it’s just another tool that can help to take a business to the next level.

“If you have more tools in your belt, that means that you can do better things, you can do better business, you can solve better problems. So technology is evolving every day, and actually, you need to keep up with that and use the best of what we have to solve a problem. So that’s very important.”

With so many exciting technological advances happening all around us, it can be easy to lose sight of the forest for the trees and forget your overarching purpose along the way. In more mature industries like banking, it can be especially difficult to focus on the end goal and avoid distractions in favor of solving the problem at hand, because business processes tend to be more complex and highly regulated.

Guga confirmed that during any transformation, regardless of the industry, the implementation of new technology is rarely the problem. The real challenge is getting the entire team on board with the changes and adopting a new culture internally to help people understand the benefits of the transformation while minimizing fear.

“Technology goes very fast. What I realized is the main problem is not the technology itself, but it’s the culture that you have inside.”

Decentralized finance is the way of the future

During our conversation, Guga confirmed that decentralized finance is the way of the future. In many parts of the world such as China, it’s already becoming the norm.

He noted that more mature economies like Europe may be slower to implement these changes because the industry is more heavily regulated. However, in emerging countries like Brazil, leaders are more willing to take on risks in favor of driving transformation forward.

Currently, countries like China are in a “cold war” of sorts as traditional centralized systems compete with newer technology. Guga explained how through the use of APIs and blockchain, a whole new world of decentralized finance is opening up, making it easy for banks to connect across international borders.

As the invisible walls around the world continue to come down and companies take on this new open perspective through a combination of decentralized connections like blockchain and an API-first approach, what can we expect to see in the future?

According to Guga, the impacts of this revolution could be even more significant and far-reaching than we might have imagined.

“When you open your company, your APIs, your services, you become more powerful and you create a network effect with new access and more data. In other words, when I speak about network effects, users and data, that’s the future. It’s key for their success.”

As Guga explained, creating a more open, decentralized landscape will have a positive impact on everyone involved. However, regulators still represent a major piece of the puzzle—if they don’t get on board with the changes, regulators could slow the rest of the world down in its journey of transformation.

In order to continue driving change globally, there needs to be a combination of progressive governments like Brazil and consumer demand to push regulators forward.

After speaking with Guga, it’s become clear to me that he’s a die-hard futurist. He has his finger on the pulse of exciting new developments in technology, and he believes AI will act as the main driver for innovation in the near and distant future.

“On top of that, we’re going to see Web 3.0 getting very strong, and also AI is going to be basically the gas of everything now. So these three things, in my opinion, are really disrupting the market over the next three years and there are a lot of investments in all of them.”

In many ways, technology in society is still in its infancy. As Guga alluded to, we’re just now beginning to scratch the surface of key areas like AI, virtual reality and cryptocurrencies.

It’s exciting to think of the massive potential for disruption behind technology and the new discoveries just waiting to be unearthed. Over the next decade, it will be thrilling to watch the evolution continue to unfold.

What a fascinating episode with Guga. Here are a few of the key insights I took away from our conversation:

Technology is a tool businesses can use to solve problems. However, some business leaders easily become overly excited about the technology itself, forgetting why they adopted it in the first place.

While it’s important to keep up with technological revolutions, it’s essential to remember the problem it was created to solve in order to stay focused on generating positive forward momentum.

Change management gets easier when business leaders do their best to ensure that everyone within the company is on the same page in terms of technological upgrades.

Leaders need to remind everyone within an organization that the new technology is being implemented to improve their experience, not make their lives more complicated. Reassure them that their roles and compensation will be protected regardless of any increased risk due to the adoption of new tech.

The speed at which different countries adopt new technologies largely depends on the economic maturity of the region.

For example, Brazil’s economy has accelerated in years past due to certain factors such as inflation, while more mature countries in Europe may be slower to adopt advanced technologies because of the strict regulations and bureaucracy involved.

Today, we’re seeing a technological cold war across the globe. Platforms like WhatsApp and Facebook have the potential to become more powerful than the world’s biggest banks, should they choose to create their own digital currencies.

Guga believes token currencies need to be tested in a “sandbox” environment, so that companies and regulators can discover potential risks before the tokens are used on a broader scale.

In the future, Guga predicts that the Metaverse, web 3.0, and AI are three major technological movements that are set to revolutionize the world as we know it, with AI acting as the gas to drive it all forward. He notes that businesses and later, government bodies, will be opening their APIs to create a network effect and collect more of their users’ data.

With this revolution, stronger government regulations are sure to follow, which have the potential to slow things down or drive the movement forward, depending on the country in question.

And if you missed previous episodes, catch up here.