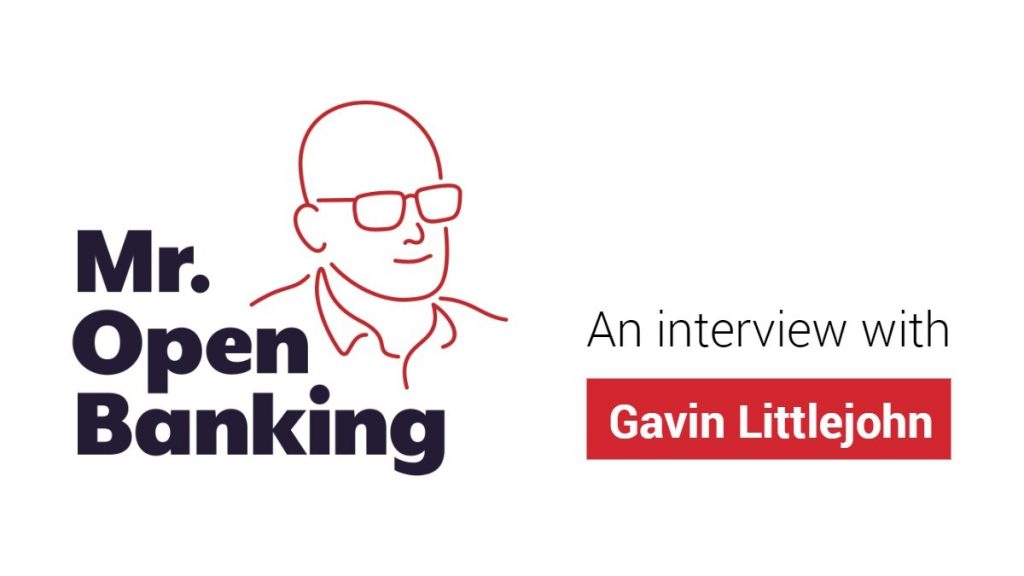 The following article is an adapted transcript of Episode 2 of the Mr. Open Banking podcast with Gavin Littlejohn. The audio version is available here.

To understand the evolution of open banking, you must first understand how it came about, a path that to date has been largely forged by regulation.

In this edition of Mr. Open Banking, we’re joined by Gavin Littlejohn, Chairman of FData Global, to discuss data rights, creating standards, and the current global landscape of the open banking movement.

FData Global is a not-for-profit organization that leads negotiations between banks and regulators to develop their open banking initiatives all around the world. Prior to joining FData, Gavin was the Founder and CEO of Money Dashboard, a global fintech application that helps give businesses a fuller picture of their financial data.

Gavin also heads up the fintech stakeholder group of the UK’s Open Banking Implementation Entity or (OBIE) and is an advisory board member of The Berlin Group’s PSD2 implementation, the leading European open banking standard.

As one of the most vocal champions of open banking, how would Gavin describe it to the average person?

“I try to compare it to electricity. We don’t actually use electricity directly. We use applications that connect to it.”

So basically, open banking is something you plug into, sort of like a utility. If you live in Europe, you may have heard that open banking came along in response to an EU regulation called the revised Payment Services Directive or PSD2.

How did this change how Europeans interacted with their bank?

It gave them the right to share their data, Gavin explains. Prior to PSD2, customers were engaging in open banking apps without any regulation in place. This created confusion around who owned the data, with some banks claiming they did.

Now, Europeans are free to share their data with the understanding that it belongs to them and that the banks have no legal right to stop them.

PSD2 discussions first started between 2008-2010. During this time of recession, there was an explosion of digital technologies and innovative tools from fintechs. They found inventive ways to make consumer lives easier by offering unique, specialized financial products and services, sneaking slowly into territory historically reserved for the banks.

The issue was (and is) that these new players are completely unregulated, so banks told their customers not to use them.

To Gavin, the answer to this issue was obvious: find a way to let the customers have the financial tools they want, but do it in a way that can be controlled and regulated.

So here’s what he did:

He helped to establish a regulatory framework for the new market to thrive in Europe, under the FData banner. To create and ultimately implement that framework, he focused on what he calls the four building blocks of open banking:

By establishing actual enforceable laws that underpin open banking, both fintechs and customers would be protected without banks blocking their data sharing.

So clearly, Europe is ahead of the game.

But what’s the difference between how open banking is developing there compared to, say, the United States?

The US is really where open banking began, Gavin says. American fintechs have been building applications for decades that allowed FI’s to connect multiple accounts on behalf of the customer, without regulation. In Europe, they have only just started developing these apps since PSD2 came into force.

Let’s zoom in a bit.

What are the things Europe got right and, perhaps, the things they got wrong?

On the good side, Europe enacted privacy legislation that gave customers’ explicit rights to their financial data and a legal framework for sharing it. Unfortunately, that framework is limited to payment data only.

This means that right now, customers can share their data for checking accounts and credit cards. But data for loans, mortgages, or investments fall outside of the regulations.

Europe also didn’t put anyone in charge of making sure the new standards were coordinated. Instead, they left it up to the market. The result? A balkanized set of implementations across Europe is mostly made up of poor quality APIs that have made banking more difficult.

Let’s cross the pond to the US. How’s it going there?

Although America is making great progress on the technology front, its complicated regulatory landscape is hurting the market conditions, Gavin explains.

Not only do customers not have the right to their own data, but banks are in full control of which fintech apps their customers can use. This limits the consumer’s ability to see a full picture of their financial life.

Gavin calls this concept “closed banking” and says if the US market wants to thrive, it needs to remain open and competitive.

Despite the growing pains, these regulatory efforts are united in a common goal to define an open standard for sharing financial data and to give control of that financial data back to its owner: you.

And this is where things get tricky. This idea of data rights comes in and it raises the question of whether personal ownership of data should in fact extend beyond banking.

So, what exactly does it mean to own your data?

Well, it’s less about owning your data and more about having the rights to your data. That’s the right to share it and the right to take it away.

Historically, financial institutions that own the customer, own their data, too. This creates an unfair competitive advantage between the bank and the consumer, which is why data rights are so important.

In Australia, they went straight to the heart of it. Instead of adopting open banking, per se, they introduced the CDR: the consumer data right. According to Gavin, this could shift the concept of open banking and data rights into other competitive markets, like phone service providers.

If we could wave a magic wand and all the world’s banks embraced open banking, what possibilities would open up for them?

It would allow them to create intuitive apps that work in the background, anticipating the customer’s needs, and offering holistic financial advice. These apps are driven by algorithms that work best when they have access to the right data and a standard that allows data to be passed around.

Without all the above, you’ll always be limited in the financial decisions you can make and the products and services you can use.

“It’s critically important in the modern world for the customer to be empowered with their financial data to enable them to access products and services which work for them. Not necessarily for the incumbent supplier of their financial services.”

What role does FData play in helping all of this become real?

Since forming in 2013, FData has lobbied front and center for countless regulatory changes and the use of APIs for solving in PSD2. But after OBIE was launched in the UK, FData found that several of its members were also operating in other markets.

This lit a match. FData opened a chapter dedicated to North America, followed by chapters in Australasia, India, and South America. Every chapter works together to develop strong open banking initiatives and regulations for consumers in their region.

While these markets are creating a foundation for customer data rights, Gavin says the most successful markets have technology standards for high-quality APIs.

One exciting project FData is working on is the Global Open Finance Center of Excellence or GOFCOE. The purpose of GOFCOE is to use data from around the world to develop useful training data that will reduce risk and complexity for market entrants. It’s like a giant international open banking sandbox.

But the actual dream here, Gavin says, is a global open banking standard.

One API. One common shared way to bind all the banks in the world together, the way the internet binds all the world’s computers together. So that, instead of banking being confusing, opaque, and expensive, it becomes simple, clear, and empowering.

And best of all, since it’s an open standard, everyone has access. Just like Gavin’s electricity analogy.

So how can a regular person take control of their financial data to prepare for open banking?

For Gavin, it’s all about dipping your toes in the water. He suggests looking at reviews and trying out apps that you think might meet your needs.

“Hopefully those applications will continue to evolve and innovate and identify new pieces of your financial puzzle that they can solve for and improve,” he says.

Although still wearing many names, from open finance to customer-directed finance, the groundwork for open banking is being laid as we speak. With the help of standard bodies like FData, regions around the globe are creating regulations, bodies, and consortia to discuss how best to adopt it.

Simple: To build the foundation for the digital economy of the 21st century. A foundation based on open banking.