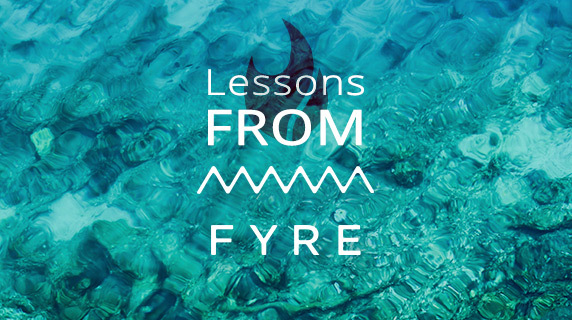 “Fyre: The Greatest Party That Never Happened” the Netflix documentary chronicles the grand ambition and ultimate failure of the Fyre Festival. Fyre Festival promised a luxury experience on the island of Great Exuma in the Bahamas. Marketed as the “Coachella in the Bahamas” – it was targeted to the elite and affluent, but it turned into a nightmare situation. Attendees were stranded with half-built huts for accommodation, served inadequate food and many had no water.

It’s rare to see a project fail so spectacularly and so publicly. However, the warning signs were there, and they can often predict smaller failures that a good product team should learn to identify and address. 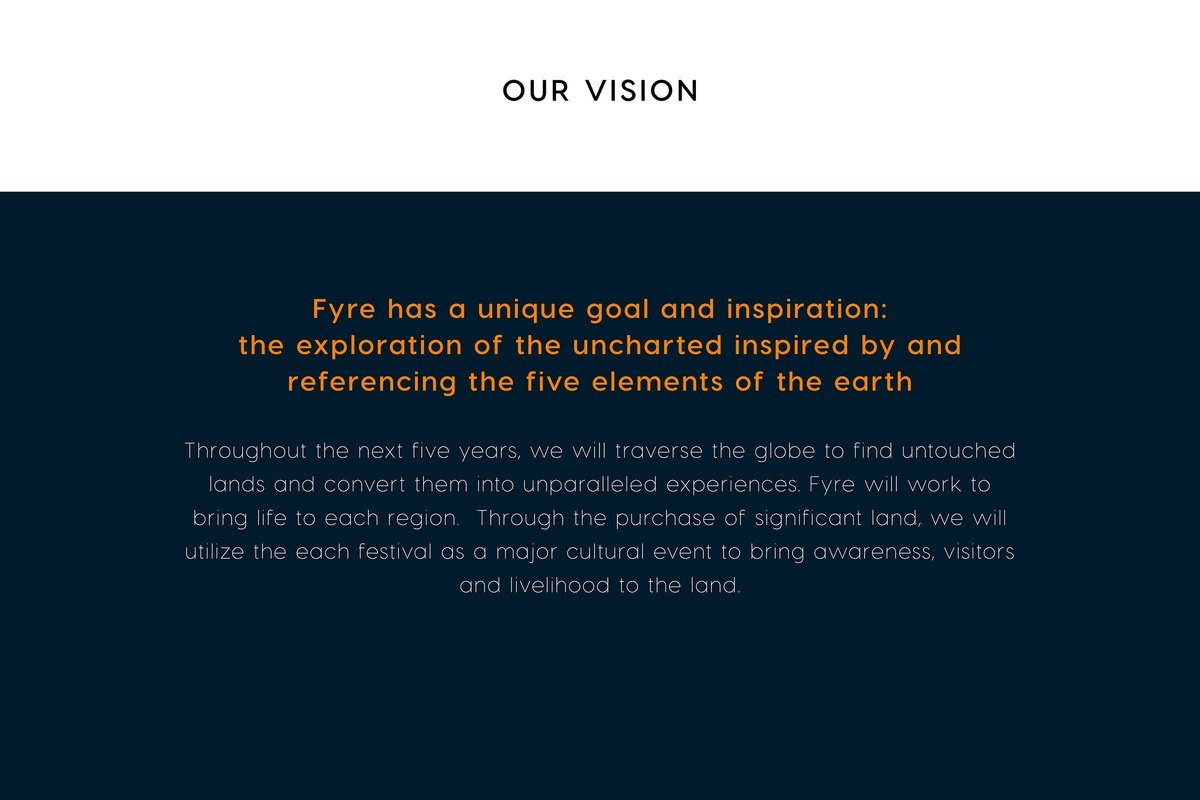 Fyre Vision from their pitch deck

If you read Fyre’s text in orange above, you’d be very hard pressed to know what their true intentions were. Were they doomed to fail from the outset with an ambiguous vision?

Once there is an understanding of the vision, the next steps that need to be worked out are “what” and “how” will this vision be addressed. The “what” is the product or service to be created and the “how” is the R&D work required to build the product. The confidence level for delivering on the overall vision starts low because it is aspirational – it is a long-term direction. However, the confidence level for the short-term work is very high because the work needs to be done today, is known and understood work. 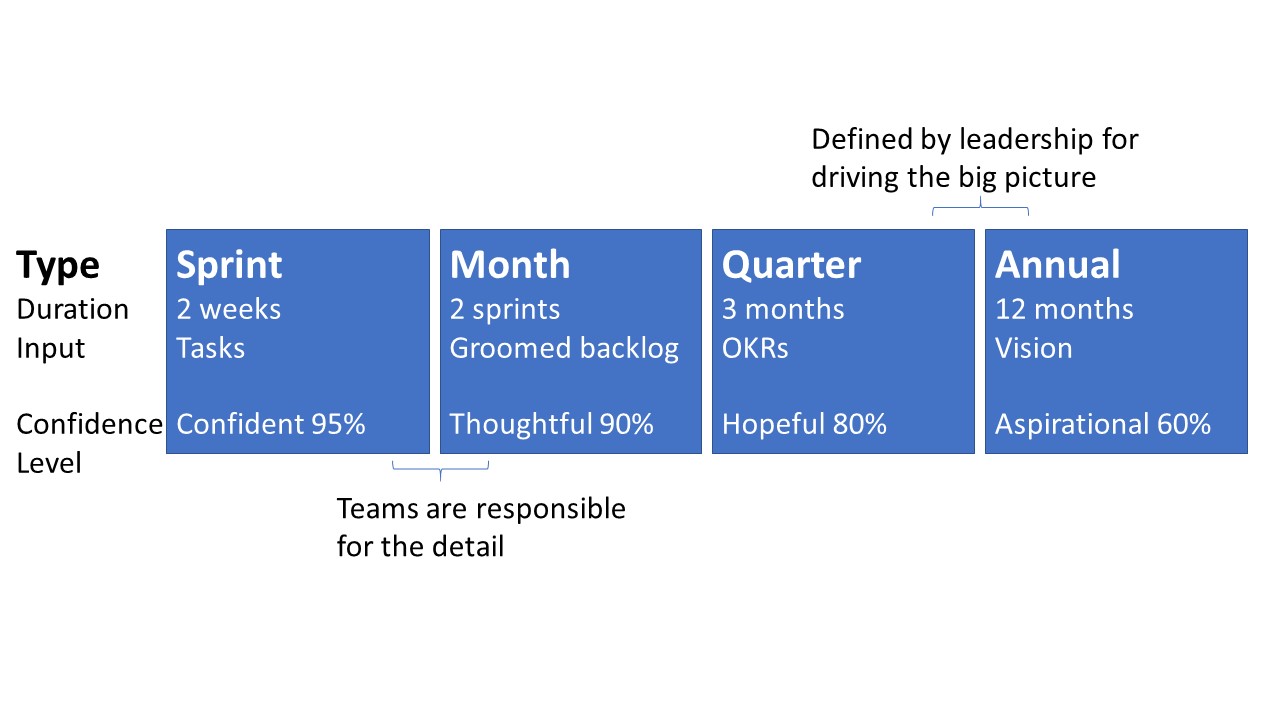 Steps required to execute towards a vision

Without proper reflection, it is easy to lose sight of the vision and lose momentum and direction. To mitigate against this type of wayward direction many companies adopt Objective Key Results (OKR) per quarter. OKR is a technique for setting and communicating goals and results. Its main goal is to connect company, team and personal objectives to measurable results, making people move together in the proper direction. OKR has been adopted by Google, Twitter, LinkedIn, Dropbox and Oracle. OKR has two components: the Objective (What we want to achieve?) and a set of Key Results (How do we know if we are getting there?). OKRs are short-lived and normally defined per quarter, in order to enable dynamic planning and faster adaptation to change.

OKRs are the focus for the quarter and the backlog that is produced for delivery teams, should be helping to push the needle towards the stated vision. Today, most delivery teams have adopted agile software development, which focuses on iterative delivery of working software. Short-lived iterations (sprints) allow for the team to continually reassess the direction towards the vision; time is provided to validate that the outcome of sprints is providing value. The backlog acts as a teams to-do list of tasks and work that they need to be worked on.

Leadership must listen to feedback

The biggest lesson I learned from watching the Fyre documentary was that you can only expect a successful outcome if leadership is prepared to listen to a team and to evolve and change direction. At one point in the film, a downpour started which wrecked the tents. While watching the downpour, one of the experienced event planners revealed that he knew at this point that they wouldn’t get away with it and that the festival was doomed. This was an experienced planner, why hadn’t his feedback been listened to in advance. Was he encouraged to give feedback? Why did he get caught up in the delusion that the festival could be a success? Leadership hired this experienced person to help them succeed, but they obviously did not encourage negative feedback or criticism. The event planner obviously knew well in advance that there were fundamental failings in the project. Leadership did not facilitate the feedback, operating in a “my way or the highway” mode. This is the type of leadership that will stifle a project and almost guarantee a disaster will occur, good leaders encourage people to challenge them. If the culture does not promote or foster an environment where one can speak up and make critical observations the initiative will be doomed from the beginning.

Despite the disastrous outcome of the Fyre Festival, one of their big successes was their marketing campaign via social media influencers. The organisers spent large sums on an extravagant launch campaign with 10 of the world’s top supermodels sharing promotional pictures and videos of themselves partying on a sun-drenched island. Via the engagement with influencers, the #FyreFest with a vague orange colored graphic garnered over 300 million impressions in 24 hours on social media.

Within product development, key influencers are analysts. Analysts are vendor neutral market experts. They are knowledgeable of all vendors in the market that they cover. They understand each vendor’s vision, strategy and ability to execute with the market. They field inquiries from buyers who articulate their pain point and need guidance on the options available in the market. They can bestow success to a startup if they flag them as one with future potential that could one day take the market by storm. The reports produced are thoroughly researched and provide an excellent view of the current state of the market. Being positioned well by the likes of the Gartner Magic Quadrant or Forrester Wave can provide a large boost to sales and pipeline; not positioning means that pipeline can dry up. Analysts are major influencers in the market.

Analysts are the key influencers in the technology markets

Today, social media can make and break your product. For Fyre, with the help of social media, they were a hit and sold out the festival. However, even though Fyre was hosted several thousand miles away, it became instantly clear at the start of the event that it was going to be a disaster.

Marketing via social media can enhance brand awareness and potentially grow brand loyalty, but if the product does not match the portrayed images then the community will quickly turn. At Fyre, attendees were marketed and sold an image of a tropical paradise and to live like celebrities for the weekend, but instead, they were met with disaster. Concert-goers found themselves without expected transport (the”private jet” turned out to be an old rebranded aeroplane), inadequate food (cheese), water, shelter (“luxury cabanas were “emergency-relief tents”). 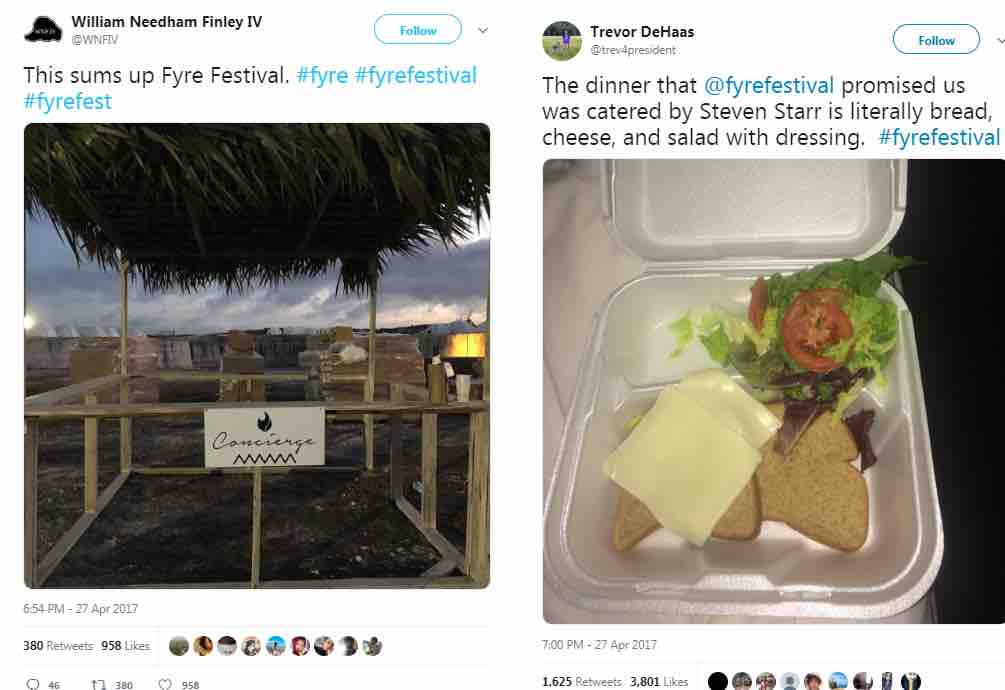 Social media coverage of the reality of Fyre festival

Social media is used to attract talent to an organization. Organizations work hard to position their culture, values, diversity and inclusivity via social media. At times, this can be a light veneer over the reality and when the employees/customers see this, they are quick to vent on Twitter, Glassdoor or LinkedIn. Do not artificially position your company or product on social media as it will come back to haunt you!

The vision of Fyre was ambitious, but the execution on that vision was a failure. Most successful music festivals start from small and humble beginnings. One of my favorites, Electric Picnic, started catering for only 10,000 people and has grown in its 15-year history to almost 60,000. Coachella itself started off as a Pearl Jam concert for just 25,000 in 1993.

A lot of projects will start with a Minimum Viable Product (MVP). A common misnomer is that MVP is the smallest version of the product you can build to make progress. However MVP is a lean term, and it’s intended to serve accelerated learning. It therefore means “the smallest amount of work to answer a question”. Somewhere along the line, that message got blurred (and the originator regretted ever coining the term). The smallest amount of work could be a survey, for example, not a feature.

Once the MVP is answered, the resulting feedback can steer the the product direction so that it evolves and grows. You have now begun the build-measure-learn loop, where every evolution of the product is based on learning from measurements / customer feedback. If Fyre had assessed and learned, it may have decided to quickly abandon the Bahamas and to host the festival in the USA, etc. 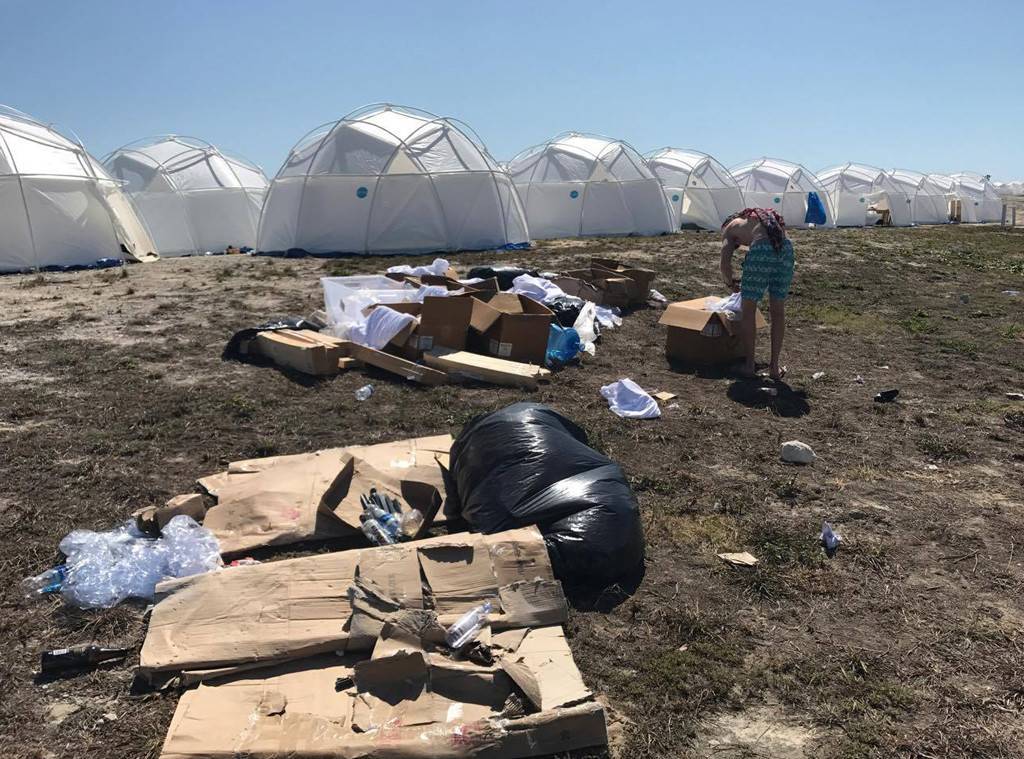 Fyre was faced with complex logistics in hosting a luxurious festival in the Bahamas. They needed infrastructure, such as transportation (air, sea, road), toilets, housing, catering, which could cope with the number of attendees and their elevated expectations. Fyre like R&D projects face the need to invest in internal infrastructure to help facilitate the delivery and deployment of the product (see CI/CD or to the Moon and Back). This investment in the delivery factory / engine is best summed up by Satya Nadela, CEO Microsoft:

There cannot be a more important thing for an engineer, for a product team, than to work on the systems that drive our productivity.
So I would, any day of the week, tradeoff features for our own productivity.
I want our best engineers to work on our engineering systems, so that we can, later on, come back and build all of the new concepts we want.
– Satya Nadela

If you want to join us on building our vision – we’re hiring. Find more details here: https://www.axway.com/en/company/careers