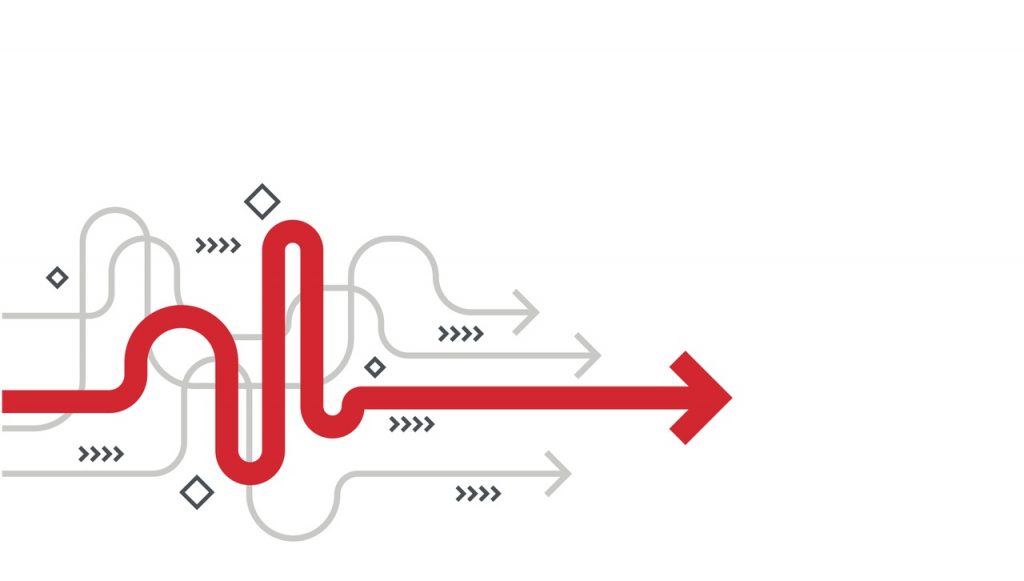 Journalists around the world have been busy lately asking what the future may hold. As the last two years have been marked with uncertainty and dramatic, unpredictable changes, it’s an understandable impulse. We don’t know everything, but here at Axway we’ve been guiding digital transformation and helping companies to create brilliant digital experiences for over two decades now.

We asked Axway leaders and experts what they thought we might expect in the near future. We even dedicated the first episode of season 3 of the Transform It Forward podcast to the topic, with the panel discussing everything from cloud technology to APIs, “data fabric” to the metaverse, and the need for a zero-trust approach to security.

Read on for a look at how the industry might change, what to expect in open banking and healthcare, and how some of the mainstays of our daily lives might change in surprising ways.

Much ink has been spilled about the Great Resignation – to the point that one NPR reporter recently wondered if maybe we were all overhyping things a bit, suggesting the phenomenon would be better dubbed “the Great Renegotiation.”

One thing is clear though: things are changing for the modern workplace, not least of which is where that work is done.  Chief Catalyst Brian Pagano believes that in addition to remote work, remote education will gain traction.

“The zoom-based classes that schools have been using as a stopgap will look primitive in comparison with tools that will emerge in the near future. Universities will soon feel the shift too,” said Pagano.

Meanwhile, VP of Healthcare and Life Sciences Ruby Raley says the need to retire Tech Debt is going to be front and center for CIOs.

“With inflation, staff issues (great resignation and burn out), and more, CIOs will need to find operational efficiencies to fund new projects. One of these steps will be tech consolidation to reduce maintenance spend,” said Raley.

Consumer expectations are leading the way

Consumer habits are changing too: in the UK, consumers say they now shop more online versus in-store compared to pre-COVID-19 times.

Joel Reid, General Manager of Axway UK, explains in Business Reporter how retailers can use APIs to re-invent themselves for today’s omnichannel world, giving customers what they want, when, and how they want it:

“APIs are enabling retailers to innovate and extend their omnichannel prowess. Whether that’s making it easy for consumers to start and complete purchases in different channels or eliminating the friction points that frustrate customers. All the while, collecting valuable data that retailers can use to engage in a more meaningful way with customers, optimize their operations and make better inventory decisions,” says Reid.

A recent global consumer survey by Axway found nearly 60% of people believe it is worth giving companies access to their personal data if it results in a better user experience. And one thing that will improve users’ experience, says Chief Technology and Innovation Officer Vince Padua, is making their choices easier by earning their confidence.

“In the ‘age of any,’ customer confidence is becoming more critical than choice. It’s cliche to say that customers want choice and selection. With the abundance of choices consumers and businesses have today, I predict that choice isn’t what these constituents desire; instead, they seek confidence in the decisions they make.

“To reduce ‘choice fatigue’ and increase stakeholder confidence, enterprise software vendors will consolidate products into bundles and subscriptions. Those who do this well – user experience + increased confidence – will see shareholder value grow twice as fast as their top-line revenue.”

Enterprises will accelerate and expand as they adapt

Padua says the journey to the cloud for established enterprises will continue and accelerate.

“This will further depress legacy IT investments while enterprises search for innovation and growth. Between the ongoing march to cloud, coupled with an aging IT workforce and a globalization of skills, we will start to see a return to increasing productivity of the business worker. While non-farm labor has declined in productivity for the last decade, it is likely we are at an inflection point with various technologies and generational turnover that productivity growth is possible,” says Padua.

Meanwhile, B2B integration and collaboration will accelerate its digital transformation built on the backs of APIs and the cloud.

“Because cloud-native and API-first approaches have matured to an ‘open everything’ architecture, the time and cost to innovation through partnerships and collaboration has significantly decreased.

“Furthermore, as the enterprise surface area is API-centric, more innovation is unlocked by unbundling and re-bundling offerings and supply chains across industries and verticals. I see significant investment and start-up growth in B2B offerings for travel and logistics, warehousing, manufacturing, lending, insurance, and boutique retail. We won’t be talking much about GraphQL come the end of 2021. REST will continue to reign supreme,” says Padua.

And this growth and explosion in possibilities isn’t reserved to large companies anymore: Pagano says he expects Enterprise Software to expand across industries.

“Enterprise software vendors have traditionally catered to the Fortune 1000-type companies. But a huge swath of smaller and mid-sized companies now need technology on par with the big players. They need their businesses to become consumable platforms. They need to participate in ecosystems. So, successful enterprise vendors will start catering to these markets,” explains Pagano.

Find all the latest expert commentary in the Axway Newsroom.

Full steam ahead on Open Banking

Open Banking has been gaining momentum for several years now, and Axway’s Head of Open Banking Eyal Sivan is optimistic about 2022. He sees three major trends coming into play:

Open banking focus will shift from standards to value generation

“Since open banking was originally introduced in the form of regulation, the focus of these regulated regions has understandably been on compliance; as a result, open banking has often been painted as a compliance exercise,” says Sivan.

“However, two things are changing: first, regulated players are looking to generate a return on their initial investments; and second, market-driven regions are beginning to adopt open banking in absence of regulation. These two factors will fundamentally shift the focus of open banking over the next year, from regulatory compliance to the generation of real value.

“Expect banks and other players in the financial ecosystem to demand solutions which tie open banking to their existing assets and capabilities in order to deliver on business-driven initiatives.”

“North America is often painted as a laggard in open banking, primarily due to the lack of any regulatory movement similar to that in Europe, but also because of the lack of a common, open shared standard to tie together the financial ecosystem – despite the continuous growth of FDX as the best contender.

“However, this year saw some early signs that both the United States and Canada will begin to support their initial market-driven efforts with tacit regulatory pushes unique to their respective countries.

“Expect the coming year to see momentum build on this front, with government and industry finding a way to join hands in an effort to catch up to their peers in Europe, the UK and Australia (as well as to prevent being overtaken by Brazil, the Middle East and Africa). By the end of 2022, expect North American open banking to be much more mature than it is today,” says Sivan.

These regional differences are reflected in the above-mentioned global consumer survey, with Brazilians most wholeheartedly embracing open banking (79% of them say they view a growing movement toward open banking as a positive development) and U.S. Americans more split, with 51% feeling it’s a positive development and the rest worried about security and data privacy.

Open banking discussions will broaden in the context of open data

“Australia was prophetic in their understanding of this progression, as evidenced by their Consumer Data Right (CDR) standard, the only open banking specification that is in no way specific to banking, supporting multiple verticals across the economy right out of the gate. As a result, Australia is now introducing a compatible open energy standard, and will move to other industries from there.

“Other regions have begun to take note, leading to early exploration of standards for industries including energy, healthcare, telecom, government, and more – a road that ultimately leads to door of the largest data owners of all, the social and tech giants. Expect open banking discussions over the coming year to lean into these ideas,” concludes Sivan.

Healthcare organizations will need to take the long view for interoperability

As Sivan notes, healthcare is one industry that’s seeing a lot of momentum to open up data securely to create better patient and consumer experiences – and the pressure isn’t just coming from governments.

“And here’s the kicker for companies like Amazon and Walmart: they have an employee base large enough to test their healthcare offerings before going full scale. Big Tech and Big Retail will accelerate the consolidation (via acquisition) of the healthcare vertical and disrupt incumbent supply chains,” says Padua.

As for the healthcare industry itself, Ruby Raley says self-service and process automation are starting to peak now, but these are going to get stronger as CIOs look for ways to improve consumer, partner and developer experience and streamline processes.

“For example, health plans are currently having to scale solutions to meet the demands of the Interoperability Rule, 21st Century Cures Act. The challenge is extensive, from enabling self-service connectivity, providing robust security & audit, to scaling up to meet a difficult-to-estimate traffic volume. Self-service and automation are the clear answer to minimizing the impact on staff and systems,” explains Raley.

And health organizations have a game-changing tool in their arsenal: the FHIR Patient Access API.

The regulatory compliance date for the CMS Interoperability and Patient Access Final Rule came and went in 2021. But Raley sees that the industry is looking beyond compliance dates and understands the need to move from project-based integrations to self-service integrations.

“Changing from a compliance mindset, with an 18-month or six-month project sprint, to a composable ecosystem of built components will help healthcare partners get to an advanced explanation of benefit or price estimator faster as additional interoperability regulations roll out. There is an immense opportunity to transform how healthcare works with its partners – and a more modulable healthcare company is going to be a major competitive advantage,” concludes Raley.

There certainly appears to be demand from patients for what APIs and Open Healthcare can offer: three-quarters (76%) of people agreed in a recent global consumer survey that their health providers should have the same, most up-to-date information about a patient, citing reasons like improved care, decreased human error, and greater convenience to the patient.

What will millennials ruin next?

First it was retirement savings and avocado toast, then they came for the 9-5 workweek. Now, social media could be next (or is it the reverse?).

“They are certainly suffering. These will be replaced by more niche social apps (which would more closely mirror our real-life relationships). We hardly ever walk into the middle of a busy street and start screaming our opinions and meal choices like we do on Twitter,” said Pagano.

He also suspects movie theaters may never totally come back, now that Apple and others support watching together with friends and most movies are releasing simultaneously on the streaming services.  Pagano adds, “this points to a larger shift in not what we do, but where we do it.”

Listen to the 2022 kickoff episode of Transform It Forward, where CMO Paul French hosts a roundtable panel discussion with CTIO Vince Padua and Chief Catalyst Brian Pagano on what the year ahead will hold.