Welcome back to “Talk with a Titan,” our Q&A feature series devoted to highlighting the work and expertise of some of the most prolific members of our Axway developer community.

Talk with a Titan: Simon Buckingham

For our third installment of this series, we looked across the pond to spend some time with designer + UX extraordinaire, Simon Buckingham. For over 20 years (including nearly a decade of using Titanium), he’s used his unique combination of design, animation and programming talents to create incredible digital media experiences—even founding Icecandy, his own boutique digital studio, with his wife in North London.

Simon sat down with us to explain the importance of good design + UX, how he made the jump from designer/animator to mobile development pro and how yoga is his secret weapon for debugging. Here’s a transcript (lightly edited) of our conversation:

We’ve heard that you founded your own digital studio, Icecandy. The work you’re doing looks unique and encompasses much more than just mobile development. Can you tell us more about the company?

SIMON: Icecandy was founded more than 20 years ago by myself and my wife Yumi. She is a graphic designer and animator, so much of our work has focused on the entertainment industry, but also clients in corporate and education, too.

On the interactive side, we currently specialize in mobile app production. What makes Icecandy unique is that we’re a design-led company and always take that approach, backing up our creative ideas with the technical expertise to pull them off.

READ MORE: Give your Titanium app a boost.

How did you come up with the Icecandy name?

SIMON: Everyone asks me that question! (laughs) It was suggested to me by my wife, who is Japanese, because “icecandy” in Japanese means “lollipop.” It symbolizes lightness, freshness and fun—which we think captures the essence of our work—and means our logo is a very cool, swirly looking lollipop!

Can you tell us more about some of your favorite projects that you’ve done with Icecandy?

SIMON: In the 2000s, we did some cool work for an American company called Believe Media around broadband entertainment. Fun fact, we ended up working on the BMW Films campaign, which was one of the first broadband campaigns ever. Another client we had was Momentum Pictures: a leading independent film distributor in the UK. We created 3D animation and marketing materials for them. During that time, we also did a lot of education work—which was originally CD-ROMs and websites—that eventually became the first apps that I made using Titanium.

After that, I started making apps more regularly, but always with a design and UX-based approach. The biggest app I’ve worked on is called forghetti. It’s a password manager app that I worked on with fellow Titan, Jason Kneen. I’ve spent 10 months working on it and it’s quite unique in its approach. When you request an account login, you doodle a signature pattern on your touchscreen to generate the password in real-time.

Oh wow, that sounds cool. So how did you get into mobile development and are you still building cross-platform apps today?

SIMON: I decided to start focusing on mobile programming about a decade ago. My primary development skill before that was Flash, and at the time I could see mobile on the horizon and how there’d be less demand for Flash. Also, everything I did was for a global audience, and so I was always worried about platform compatibility (which in those days was PC v Mac). When making the move to mobile I wanted to be sure I stayed cross-platform.

I looked at a few different frameworks but fell in love with Titanium as soon as I started to use it. It was easy to pick up, and for the last 8-9 years, my work has been almost completely Titanium mobile development for cross-platform. To me, without going native, Titanium is the most comprehensive toolkit for cross-platform development.

So then, do you have any tips for our audience who are just getting started developing cross-platform apps with Titanium?

SIMON: Join the Ti Slack community. This was the most helpful thing I’d ever done. Ti Slack has several top-notch and super experienced developers who love to help, are very patient and also willing to handhold beginners to get them going.

Even as an experienced developer now, it’s an incredible resource and wealth of knowledge to solve even the most complex or obtuse code issues. When I get the chance, I go in there to return the favor and help others overcome their development hurdles, too.

Oh, nice! How else has the Axway Appcelerator community helped you over the years?

SIMON: The Titanium meetups in London were crucial to my learning in the early stages, and I encourage people to go to meetups if they exist locally. It’s great to meet with people face-to-face and hear them talk about the development challenges they’ve experienced and how they conquered them. I actually ended up giving a couple of talks at the meetups myself!

Also, Jason Kneen has been a huge help to me over the years. He’s even written a very good book on using Titanium.

He’s not the only one to do some writing. Haven’t you penned some bylines for our developer blog, too?

SIMON: Yes, I’ve written a few blog posts on Titanium that tend to focus on my specialties, design and UX. I can’t emphasize good UX enough. The way a user navigates information and how that information appears on the screen is just as important as app functionality.

I think that’s what makes Icecandy stand out from other developers, adding that extra touch of quality to an app. If you want to read the blog posts, they are on Medium in the “All Titanium” section, here is a summary.

We definitely will! In addition to getting the design right, what is the best piece of advice you’ve ever heard? How does it apply to your work in mobile development?

SIMON: Mobile development is exploratory and you have to figure it out yourself a lot of the time. However, I think some great general advice is the acronym KISS, or “keep it simple stupid.”

Often when I work on, or takeover, existing projects, I find that they are overly complicated or just badly written. Sometimes this happens out of necessity and sometimes because the project has got out of control. Good project management and strong communication are key to preventing that. The times it goes wrong are usually because of no communication or poor communication. I know this from experience, having project managed and being a developer on other people’s projects. So make sure everyone knows what they are supposed to be doing.

Sounds good. Okay, last question. How do you balance running your own business with daily life, it must be stressful?

SIMON: One important thing that keeps me going is practicing yoga and contemporary dance. Everyone needs to have an escape—especially developers doing this hard, intellectual work in front of a screen all day.

Often, I’ll be stuck on a problem all day, then go to a yoga class and bang—the answer comes to me straight away. It’s a complete and utter change from the work I do, and fantastic for shaking out the cobwebs and refreshing the brain. And even better when I can practice yoga with my daughter! 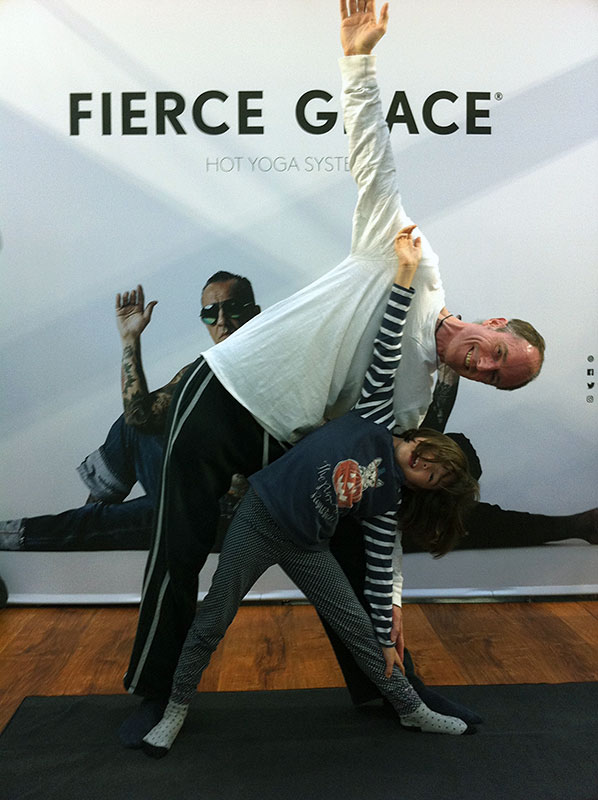 Whatever your “thing” is, you need to do it and recharge your mind.

We’ll remember that, Simon. Thanks so much for taking the time to share your unique design, UX and yoga expertise with us. Congrats again on being featured in the series!

SIMON: Yes, thanks again for having me, and I look forward to seeing more of the Titans featured here.

Want to learn more design + UX secrets from Simon? Catch him hanging out on Ti Slack, check out icecandy.com or give him a follow on Twitter @icecandyent.

Discover another Talk with a Titan story on Adam Armstrong.