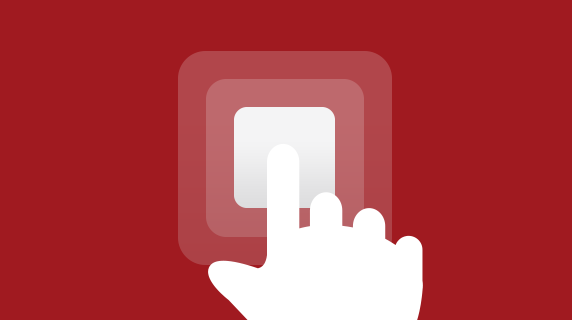 This new sample app demonstrates the new 3D Touch capabilities of the iPhone 6S. Titanium 5.1 implements Peek and Pop and Home Screen Quick Actions. The new force-properties available in touch-events will be added in a later release as well as support for the related Apple Pencil.

Force Touch was introduced with the Apple Watch and has later been added to the MacBook and Magic Trackpad for OS X. Still, these devices use two different techniques and 3D Touch is yet another.

Why Apple uses two different names for three different techniques is a mystery. We can probably expect the 3D Touch technique to come to Apple Watch 2 and new Trackpads at which point Force Touch would no longer be used.

At this moment, the iOS Simulator does not let you to simulate 3D Touch events. So to run and test the sample you will need an iPhone 6S to build to.

NOTE: There is a tweak available to simulate the Quick Actions in iOS Simulator.

Press firmly on the app icon to reveal the static Quick Actions or Application Shortcuts. Once you’ve used the app add and then view a picture, you will also see the dynamic shortcut: 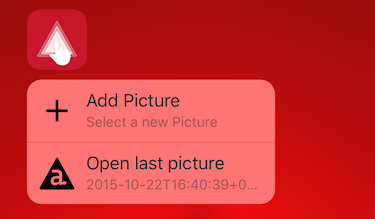 Static shortcuts must be specified in Info.plist and work right after the app has installed. In Titanium you will add them to tiapp.xml under the ios/plist/dict element, but apart from that you can just follow the Apple Reference.

In the sample app we’ve added a Quick Action to select a picture from the device photo gallery to add to the app.

NOTE: To use custom template icons the image must be in an asset catalog. This is an optional feature in 5.1.0 that can be enabled by <use-app-thinning>true</use-app-thinning> under the ios element in tiapp.xml.

NOTE: It is a known issue that to use a custom template icon for static shortcuts you need to find the corresponding hash of the image found under build/iphone/Assets.xcassets.

We’ll come back to how we handle the action later.

Dynamic shortcuts are created via an instance of Ti.UI.iOS.ApplicationShortcuts, which means they will only be available once you have used these APIs and they can also be removed.

In our sample we create a dynamic shortcut for the last-viewed picture in the details controller. We first create an instance of the above API and then use addDynamicShortcut. The params are similar to the static shortcuts, with the exception of icon which can be either the path to a Template Icon or one of the Ti.UI.iOS.SHORTCUT_ICON_TYPE_* constants.

NOTE: As you can see, we first use Ti.UI.iOS.forceTouchSupported to test if the OS version and device actually support 3D Touch. The app might crash if you don’t!

When a picture gets deleted from the app we use the different APIs also demonstrated in the api controller to also remove the shortcut if it happened to be the last one we’ve viewed. You’ll find this code in the thumbnail and details controllers.

When the user taps a Quick Action, the Ti.App.iOS:shortcutitemclick event is fired. The payload includes all properties you have set static or dynamic shortcut except the icon. Simply use itemtype to identify the shortcut and act accordingly.

In our sample app we’re listening to the event in the pictures controller. For the dynamic details-shortcut you can see we’re using the custom userInfo payload to get the actual model ID of the last-viewed picture.

Press firmly on one of the thumbnails in the sample app to play with Peek and Pop. As you start applying more force the rest of the screen will blur, then a preview will appear and finally the details window will open. Swipe up while you Peek to reveal any quick actions available. As you use it more often you will get a feel for the amount of pressure needed to trigger Peek directly.

To add Peek & Pop to a individual view or a ListView, create an instance of Ti.UI.iOS.createPreviewContext and set it to the view’s previewContext property. When used in a ListView you need to listen to the PreviewContext’s peek event and update the view set to its preview property.

A special thanks to community member Ben Bahrenburg for his initial implementation of the Quick Actions. Appcelerator engineer Hans Knöchel implemented Peek and Pop and did the initial version of this sample.