Innovative customer service is not often the first thing that springs to mind when people think of government bureaucracy.

And yet, Germany’s federal labor agency is delivering eGovernment services in more modern and secure ways than ever thanks to Axway solutions.

What’s more, investing in integration and a digital transformation strategy early and consistently has allowed the agency to respond effectively to the massive workload increase caused by the COVID-19 health crisis.

Laying the groundwork for digital transformation

Previously, the agency used multiple digital systems to send payment files from its local offices to its headquarters.

BA started working with Axway to rationalize and streamline its approach to mission-critical data transfers and has now been relying on Axway’s Managed File Transfer solutions for 20 years to transfer payment instructions securely and reliably from regional offices to its headquarters.

BA now distributes some €150 billion in benefits every year to citizens through Axway’s secure MFT service.

Walter Karl, Lead Architect for Security and DMZ Services, IT Department at Bundesagentur für Arbeit, explains, “Local and national governments began to recognize that digital channels had the potential to transform their approach to service delivery — enabling citizens to access the support they require without the need to call or visit government offices. As these changes gained momentum in the early 2010s, there were many new opportunities for BA to add value for the German taxpayer through eGovernment services.”

In the mid-2000s, Axway helped BA with a large-scale B2B integration project that would enable the organization to share unemployment statistics with other government agencies. By the early 2010s, BA moved to digitize its documentation and workflows more completely.

A high standard of public service

BA needed to make sure its eGovernment services were available to every citizen, explained Peter Neuhauser, Head of TEC1 — CERT-BA, Network Services, and Security as a Service at Bundesagentur für Arbeit.

“As well as being easy to use, these services must deliver the highest levels of privacy and security for sensitive personal and financial data. Moving from paper files to digital records was a vital first step on this journey,” said Neuhauser.

These changes opened up opportunities to add value for German taxpayers through better eGovernment services.

In the mid-2010s, BA partnered with Axway to digitize and automate the sharing of data between BA and more than 100,000 employers in Germany.

This initiative allowed the government agency to integrate with partners in the public and private sectors so they can serve citizens more quickly and accurately.

For example, when a person becomes unemployed, the agency needs to collect recent earnings from their former employer to calculate and pay their benefits.

Axway’s B2B Integration solution brings over 100,000 German employers onto a secure, central platform so that BA doesn’t need to rely on paper forms and can instead receive and process information from employers digitally, with minimal human involvement.

“It’s now far easier to access the information we need to make timely payments to our customers,” said Neuhauser.

BA, along with its 100,000 employees, assists tens of thousands of people every day with vital public services. Employees handle sensitive requests like social security claims and unemployment benefits, so securing citizens’ data against the growing threat from hackers is mission critical.

Thanks to a single point of control for API security, BA’s dedicated cybersecurity teams can defend the organization against up to five million cyber attacks every day.

BA was ready when citizens needed it the most

The wisdom of a mature approach to data integration and security became clear in the spring of 2020 when worldwide lockdowns aimed at stemming the spread of COVID-19 led to job losses or insecurity for people around the world.

When its citizens were at a critical juncture, BA was able to quickly accommodate a surge in requests for financial support.

During the first wave of COVID-19, the German government pushed through emergency legislation for short-term working allowances.

It meant people who saw their working hours significantly reduced could get help from BA: suddenly, the agency was processing an extra 50 billion euros in payments.

“We’re very proud of how everyone at BA has come together to support people in Germany during the disruption of 2020. With Axway at our side, we navigated an extremely challenging time while keeping our IT headcount flat,” said Neuhauser.

Building for the future

Bundesagentur für Arbeit’s story is powerful because it shows the power of secure, trusted, and MFT solutions in fulfilling eGovernment’s core function: service for its citizens.

But it also shows what is possible when IT leaders catch the vision of data-driven processes better-serving people when and how they need it, with the level of customer experience people have come to expect.

The organization is currently exploring the creation of a secure API catalog with Axway for authorized software development teams at other government bodies, which would allow external developers to see rapidly which services are available and accelerate their projects.

“The potential to use our data for the good of citizens in Germany is almost endless,” says Karl, and the next generation of eGovernment services built on Axway solutions is yet to come. 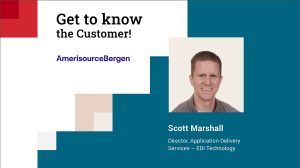 Get to know the customer: Meet Scott Marshall from AmerisourceBergen 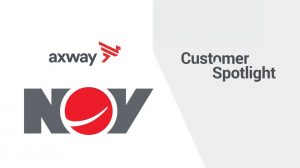 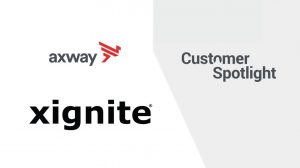