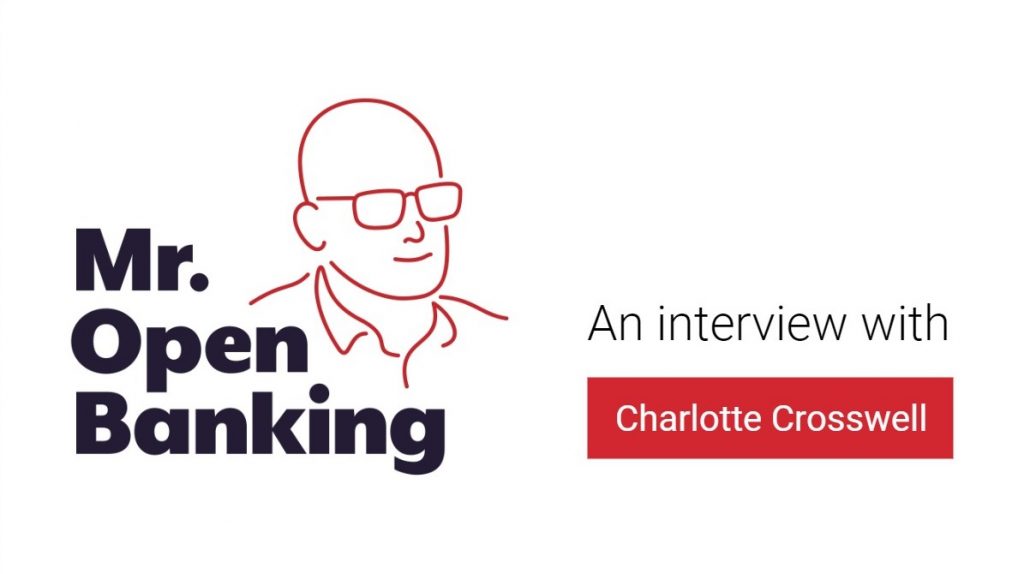 The following article is an adapted transcript based on the audio recording of Season 2, Episode 8 of the Mr. Open Banking podcast. The audio version is available here.

When it comes to the fintech space, the UK is leading the global charge. The country’s fintech ecosystem is packed with new developments, and there are several variables that can be attributed to its success.

One of the key figures behind the UK’s fintech leadership is Charlotte Crosswell. Charlotte has spent the last 25 years serving in key leadership roles at the intersection between financial services, regulation, and technology, making her a veritable expert on today’s rapidly evolving fintech landscape.

From 2017 to 2021, Charlotte was the CEO of Innovate Finance, the leading industry body representing the explosive UK fintech sector. There, she worked closely with fintech entrepreneurs and regulators alike, ultimately making key contributions to the Independent Strategic Review into UK Fintech, known as the Kalifa Review, published in February 2021.

More recently, she’s moved into a new role as the Chair and Trustee of the Open Banking Implementation Entity, or OBIE, the organization responsible for bringing open banking to the UK and, in the process, showing the rest of the world how it’s done.

On the season finale of the Mr. Open Banking podcast, I sat down with her to discuss the UK’s success as a hub for fintech and open banking.

To kick off my conversation with Charlotte, we started by setting the stage. The UK is often referred to as one of the most cutting-edge fintech environments in the world, and Charlotte has spent her career right in the thick of that development.

So, why does the UK have such a strong reputation today? And how did it get there?

Understandably, Charlotte explained the answer is far more complex than a simple bullet point, but she cited the overall history, evolution, and strong financial services ecosystem of the UK as major factors in its development.

For four years, Charlotte served as the CEO of Innovate Finance, an industry body dedicated to supporting the UK fintech ecosystem, so she was very much a part of that marriage between the big banks, the fintechs, and the regulators.

Since she and her team had close relationships with regulators and ministers, it became their mission to advocate for fintech to the relevant policymakers while fostering the overall environment.

During her time at Innovate Finance, Charlotte noted that there was an incredible fintech boom happening in the UK, but she also noticed that there was an urgent need for an overarching strategy to help guide the companies that were scaling up at the time. Part of this common national strategy demanded reaching alignment around common and productive regulations.

As a result, Innovate Finance was asked to work on the Kalifa Review of UK FinTech, headed up by Ron Kalifa. Charlotte and the team worked with Kalifa and the City of London Corporation to map out what the future could look like and put recommendations in place to better regulate the industry. She offered some examples of the recommendations that were considered as a result of the review.

The UK’s success story did not begin with open banking, it began with an embrace of fintech aimed squarely at innovation in banking. According to Charlotte, this is no small thing, as shaking up a sector as critical as banking demands strong cooperation between the fintechs and the incumbent banks; as well as between the two of them, essentially the market, and the financial regulators who keep the economy whole.

With strong support for fintech already in place, the UK was ready to move to the next step: open banking. Europe’s PSD2 legislation, often considered the beginning of regulated open banking, came into force in January 2018.

But in the UK, the Competition and Markets Authority (CMA) published their report investigating competition in retail banking almost two years prior. In early 2016, this report marked the beginning of open banking in the UK, ultimately leading to the establishment of the Open Banking Implementation Entity, or OBIE, the organization where Charlotte is now the chair.

Just as with fintech, UK open banking is often considered a global benchmark. From Charlotte’s perspective, the relationship between introducing open banking in the UK and the thriving fintech community again comes down to bringing together relevant parties within the ecosystem.

“The officials, the government, the regulators, the entrepreneurs, the fintechs, the banks, the end-users, and the consumer groups are looking at: What are we trying to achieve and how do we take that forward? We should never just be bringing in innovation to serve a fintech or a bank. We should be looking at it in terms of how it delivers to users, and that’s really important. That’s what drove the evolution of open banking.”

Charlotte noted that the fertile fintech ecosystem in the UK laid the groundwork for success in open banking. Now, the country is looking ahead to find new ways they can continue driving forward, aiming to take open banking to the next stage.

Charlotte shared a few wise parting words to end our time together. Her recommendation was to view the world of open banking as a dual challenge.

“I would definitely suggest that people look at it under two different guises: What’s possible on payments and what’s possible in data. And I think this is something that has taken us quite a long time to really work out, how we can split these out into different conversations.”

So, if you are a practitioner trying to prepare for open banking, here are a few lessons from Charlotte:

As we come to the end of 2021, the entire world, not just the UK, Europe, and Australia, but the Americas, Africa, the Middle East, and Asia are all-embracing open banking. They are embracing it because it works, because it makes sense, and because if they don’t, they risk being left behind.

Make no mistake, we are witnessing nothing less than the creation of the 21st-century digital economy. When this transition is done, banking and finance will be virtually unrecognizable.

To those out there building and making open banking real, I salute you. When you have one of those days where it feels like you’re stumbling around in the dark. Always remember that you’re not alone. There are plenty of others like you doing whatever they can to show us all how open banking is done.

To everyone who has listened to and supported the Mr. Open Banking podcast this year, thank you for your precious time, as well as your patience. It’s my sincere hope that you’ve enjoyed the journey so far as much as we have. For our new listeners, we encourage you to subscribe so you can join us next season.

Learn more about Charlotte and her work here.