Home Developer Your Very Own MBaaS: How to Move from Parse to Appcelerator Arrow 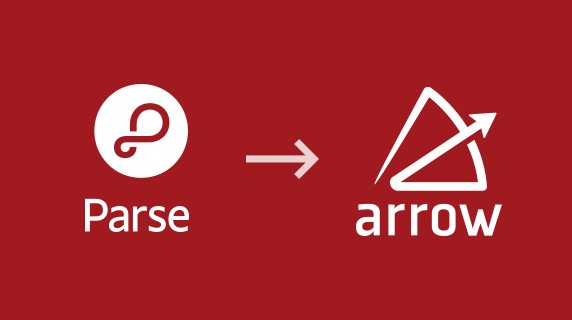 Well, we know the bad news: Parse is shutting down. This tweet sums up the feelings of plenty of devs:

The good news? Appcelerator Arrow has you covered. Whether you need data storage, APIs, push notifications, mobile analytics, or all of the above, we’ve got it. Jump into a free trial and see for yourself. We’ll also be hosting a TechTalk (replay now available) that explains the process for moving from Parse to Arrow. For a quick start, see how simple it is to host your Parse server on Arrow Cloud.

For the uninitiated, there are two key parts to Arrow:

Moving from Parse to Arrow

If you’re coming from Parse to Arrow, here are a few initial points to bear in mind:

We’ve written elsewhere about the (diminishing) role pure MBaaS plays in a market heading quickly toward microservices. We won’t bog down on it here, but it’s a key reason why we think Arrow is a better bet for a future world of apps and other “things.”

More immediately, having come from (been burned by?) Parse, there are probably several pains you want to avoid repeating. It goes something like this…

One of the nice things about Arrow is that you can choose what you want to do. Want to manage the data yourself but need a scalable server to front the APIs? Done. Need a powerful way to quickly build new, mobile-optimized APIs? Done. Want us to manage both the data store and provide the APIs via pre-build services? Done.

Terrific. What Does it Cost?

Today, we bundle Arrow capabilities and capacity as part of our tiered Appcelerator Platform plans. However, we’ve also been working to introduce Arrow-only plans for greater flexibility. The new Arrow-only plans start at $20 per month and scale from there; these will soon be part of our online pricing. In the meantime, you can reach us at here to talk about pricing your specific needs.