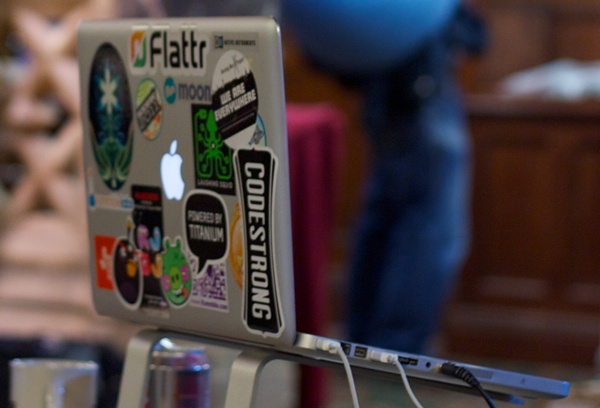 Appcelerator was one of the sponsors for this year’s 4th Annual Over The Air mobile conference in the UK. To put the event in the words of its creators, it is…

a unique tech-agnostic event for and by the developer community, featuring technical workshops where attendees can roll up their sleeves and tinker with new platforms, operating systems, APIs & SDKs; and tutorial sessions that feature real business cases, new insights and a healthy dollop of inspiration. Attendees are invited to stay overnight so that they can work on ideas, apps and hacks on the fly – to be entered into the various hack-athon competition categories and demo’ed on the second day. It’s a great vibe of bean bags, gadgets, knowledge sharing, hacking & lots of good geekery.

Fortunately for us, we had two terrific Titanium advocates in Ketan Majmudar and Liz Myers representing us at the event. Ketan and Liz are the co-organizers of the London Titanium User Group. Liz gave a great presentation on mobile UX/UI design, as well as an introduction to the Titanium architecture and how it can be used to get a jump start on your apps.

Ketan spent his time not only as a judge for the hackathon, but also fielding the constant barrage of Titanium technical questions from native developers. It was clear that although some of the attendees had prior knowledge of the platform, the majority of developers were unaware of the power it provided. Needless to say, a lot of Android and iOS developers were very curious what Titanium could do for them.

After a full day of interesting talks & workshops, nearly 600 developers had clambered through the mansion. By the evening came the ignite lightning rounds. This series of presentations allowed no talking about yourself or your job with slides automatically advancing. This made for some really interesting talks, including the keynote of the ignite sessions kicked off by Bill Thompson’s (from the BBC) talk on the philosophy of mobile.

The hackathon kicked off with 200-300 geeks staking out territory in Bletchley Park’s 19th century mansion. Power sockets and beanbags were claimed as they all took on various challenges, seeing what they could produce for the following day. Hackathon entries ranged from solid, functional productivity apps to innovations using NFC, Bluetooth, and QR codes. Ketan stayed up through the night working on his own Titanium projects whilst going around and talking to the hackathon groups. There were a lot of talented teams and individuals competing, all more than willing to discuss their projects and code. The hacking went through the night fueled by coffee, beer, pizza and sugar!

In the end, we were extremely excited to see that one of the winning entries was in fact built on Titanium. Mutsaim Karim won himself a Samsung Galaxy S II courtesy of PayPal for his X.Commerce entry. His app allowed groups of friends to share and contribute to a single PayPal payment. In his own words…

PayPal has a very streamlined flow for making payments, which makes it perfect for mobile transactions. There are use-cases when payments need to be collected from multiple people (e.g. group bookings for trips, whip-round for birthday gifts) and in a mobile connected world, collecting these payments online could be a smoother experience than physically accumulating them. Using the PayPal Mobile APIs, Appcelerator’s Titanium platform, Facebook Connect and QR codes and nifty solution can be built which solves this predicament.

Over The Air was a great event of which Appcelerator was proud to be part. Thanks again to Ketan and Liz for their outstanding representation of Appcelerator and the Titanium platform. Also, thanks go out to Dan Applequist, Matthew Cashmore, and Margaret Gold (Pictured on the right) for organizing such a successful event. This mobile conference really stands out among the rest, and we look forward to its 5th anniversary next year!