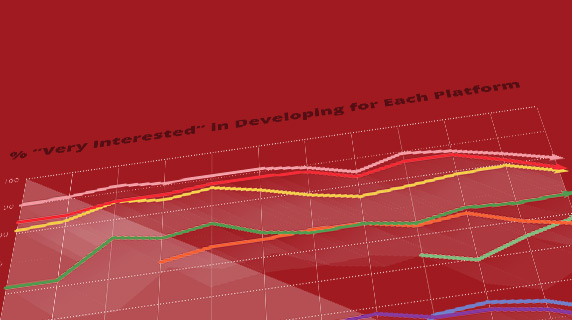 Typically every 6-8 months, depending on how lazy we’re feeling, we join with our friends at IDC for an end-to-end survey on mobility — our latest queried 121 senior IT decision makers and a whopping 8,010 mobile developers, the largest group ever. You can read about some of the (eye-opening? hair-raising?) results here.

But also of interest are the historical shifts that have emerged in the years since we’ve been running this survey, which goes all the way back to the prehistoric mobile days of 2010.

Here are a few of the big changes we’ve seen take place:

1. Platforms Rise and Fall
The graph below illustrates what everyone knows: Wintel is dead. Now we live in a technicolor world of target platforms. We’ve looked at developer preference across thirteen of them, ranging from the obvious (Apple, Android), to the intriguing (Windows), to the niche players and fading stars. 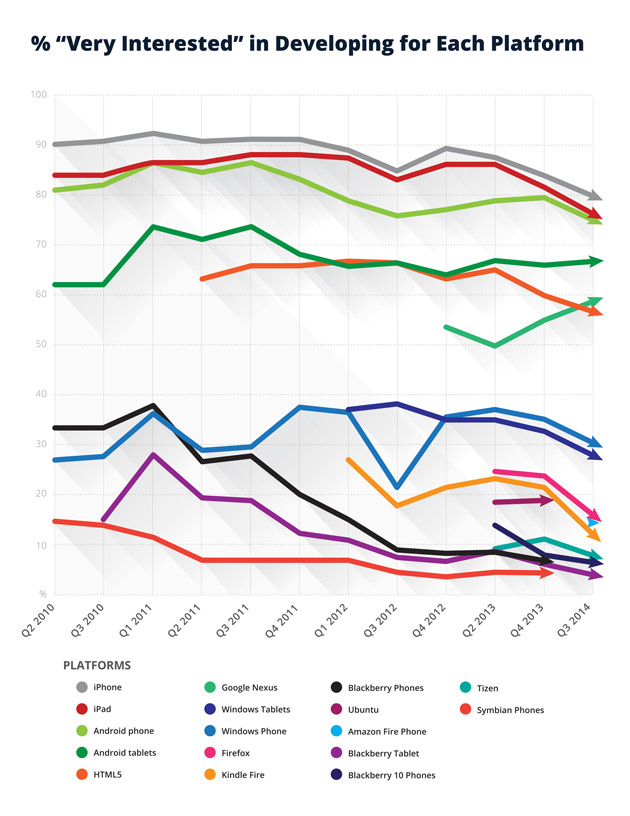 Of note in our latest view is the percentage of developers who reported being “very interested” in a given platform increased substantially only in one case: Google Nexus. Non-Nexus Android tablets (but not phones) drew a modest rise in interest. In the case of every other platform – even mighty Apple – developer interest declined.

What might this suggest? Maybe simple fatigue, with developers settling in on their platforms of choice. After all, interest can’t go upward and to the right forever. Interestingly however, companies are supporting more platforms: 83.9 percent of organizations now support two or more operating systems, up from 80.9 percent in Q4 of 2013.

2. Release Velocity Increases
One thing that has been going up and to the right? Release velocity. We’ve talked elsewhere about the sheer hell of mobile math:

But companies are finally starting to catch up to the speed of mobile, and it’s showing. In the latest survey, 55 percent of respondents said they release monthly or more frequently. That number is up from 48.6 percent in Q4 of 2013.

What’s behind the increase in velocity? In a word, analytics. Developers who were able to speed up their release cycles and support more platforms shared a common practice: regular reliance on mobile analytics. In fact, 68% of those using mobile analytics report releasing monthly or more frequently as contrasted to 55% for those without analytics.

Impressively, this increase in speed coincided an increase in the number of platforms supported: 90.9 percent of analytics users support two or more, contrasted with only 83.9 percent for those who don’t rely on analytics.

For those steeped in MVP practices, none of this will come as a surprise. An effective analytics capability short-circuits debates, and lets real user data drive future enhancements.

3. Data Sources Multiply
It used to be that enterprises would build mobile apps that were little more than standalone “toys.” Not anymore. Now 90 percent of developers and 87 percent of IT decision makers say it’s likely or very likely that connecting apps to both public and private data sources will become the norm (if it hasn’t already).

What’s perhaps more dramatic — and more telling of the shift underway — is that the percentage of mobile developers who say there is “no requirement” for them to connect to enterprise data sources fell by more than half, from 31 percent in Q4 2013 to 13 percent last quarter.

Of interest, custom web services saw the biggest leap from 2013 to this year, with 77 percent of respondents connecting their mobile apps to them today vs. 39 percent at the time of our last survey. Other sources that saw a significant increase include:

On the whole, it would seem that businesses are finally waking up to the value of data sources … but does that mean they’re waking up to the need for a mobile API tier their architectures? That remains to be seen.