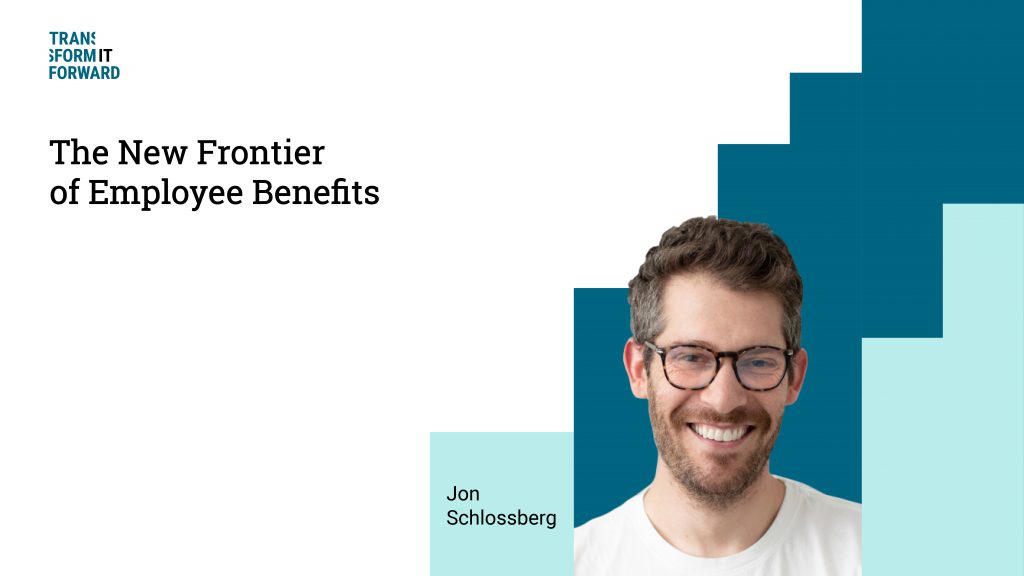 There’s a revolution happening in the financial sector, and in many areas, it’s happening fast. Technology is transforming the way we do just about everything, and financial services are no exception.

To keep up with this rapid pace of transformation, companies will need to implement new practices, programs, and skills in every area of their business. Evolution requires out-of-the-box thinking, continual innovation, and agility, and not every company will be strong enough to ride this tidal wave of change.

How can you ensure your company’s success in the long term? Let’s find out with Jon Schlossberg.

Transform IT Forward with Jon Schlossberg: Transforming the fintech industry

Jon Schlossberg is the Co-Founder and Executive Chairman at Even, a new financial services platform that’s changing the game for employee financial well-being. Even is transforming how employers look at assisting the financial needs of their employees by helping them achieve the lives they want.

As the saying goes, the more you put in, the more you get out, and Even gives you the opportunity to show you care about employees, which promotes talent retention. During the episode, Jon and I chat about the changing relationship between employers and employees, how financial incentives offer a new frontier of benefits, and how Even is transforming the fintech industry.

Jon studied psychology in college, and one concept that interested him the most was the nature vs. nurture debate. Experiences from his past had made the realities of inequality clear to him, so he had always been fascinated by uncovering the key ingredients of success.

During his research, he discovered that the number one predictor of success in people’s lives wasn’t their GPA, their schooling, or the talent they were born with: it was the amount of money their parents had. This realization got him thinking about opportunities, inequality, and how he could help level the playing field.

“The reality is you need money to do literally everything in our society today, so that’s actually a pretty good metric of how far you’re able to go in achieving the life that you dream about. So when I learned about that being the number one determiner of how successful people are, that brought me immediately to, well, you have to help people have more money. So this is definitely going to be a financial services business of some kind.”

Recognizing that for-profit businesses are the most effective drivers of change in North America, he had narrowed the idea for his next venture down to a for-profit financial services company. Having identified the problem he wanted to solve, Jon started building a team of like-minded innovators so they could come up with a creative solution together. It took the team the better part of three years to make headway, but eventually, the pieces of the puzzle began fitting together.

With a background in product design, Jon understood the value of providing a convenient solution for a common problem, and the group had zeroed in on income volatility, which means being unclear on how much money you’ll make in a period and as a result, finding it difficult to manage your day-to-day finances.

The team took a bottom-up approach, diving headfirst into research and speaking to real people who were experiencing income volatility, which is more than half the American workforce today. A New York Times reporter heard about what the Even team was up to and wrote a piece in the Sun Magazine about their work.

A few months later, a Walmart executive called Jon out of the blue and asked if they could use Even’s services for their associates. Jon responded by letting them know they were still in the research and development phase. The executive replied with an offer for them to continue their research with the Walmart team to get real-time feedback about how their product was affecting the company.

“To be clear, the largest employer in the world, a private employer, reaching out to like a five-person company and giving them essentially carte blanche access to the largest workforce in the country to do R&D, while paying you to do it, is an opportunity that you shouldn’t have and that we definitely didn’t deserve, but we took it and ran with it and it really allowed us to supercharge how much and how quickly we were learning about this problem space.”

Jon credits much of the company’s success today to this opportunity of a lifetime from Walmart, noting that it ultimately helped them build a much more effective product and learn on the job.

Given his background in product design, Jon said he relentlessly focused on the end user, when in reality, the company should have emphasized the employer as the client. He’s since corrected his initial thesis, even hiring an Enterprise CEO to bring a stronger focus to the area.

Overall, Jon says the experience with Walmart served as an enlightening yet humbling experience for the team. It gave them a chance to see the effects of their business in real time, and solve problems on a much faster timeline since the urgency of hundreds of thousands of real people’s personal finances was on the line.

“When you’re dealing with something essential in someone’s life like money, especially when they’re in a dire moment of desperation, where they are literally sitting in the parking lot trying to get money in order to go in and buy groceries for their kids, it raises the stakes to a point where you have no choice but to shut up and listen and then immediately take action.”

Here are five key takeaways from my conversation with Jon: