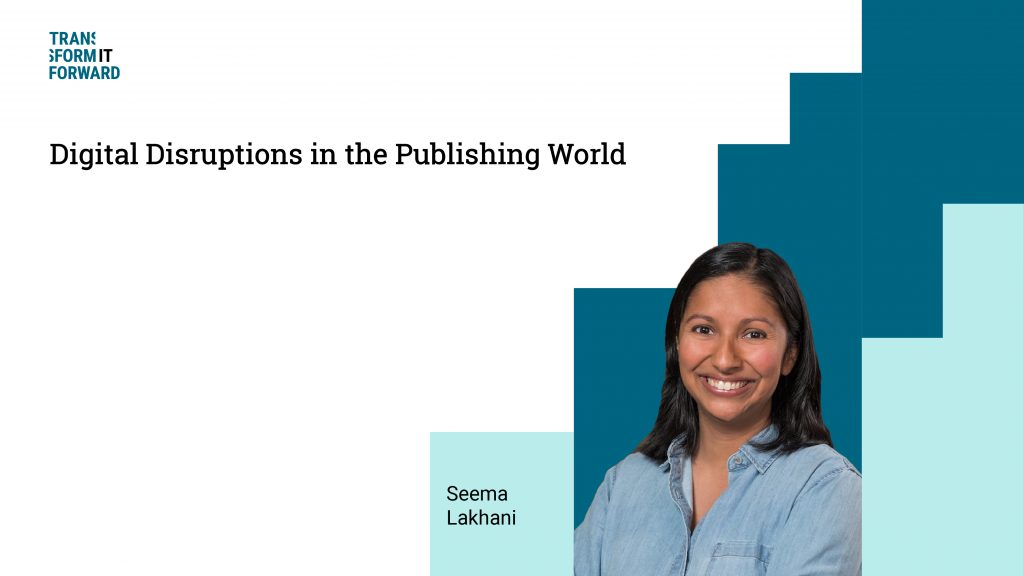 On Transform It Forward, we’re often discussing emerging new technologies, exciting innovations, and the digital revolution. But no matter how advanced our technology becomes, there will always be a fundamental human need for powerful storytelling.

In the most recent episode of Transform It Forward, we explored how technology is merging with the art of storytelling to create a completely new landscape for the publishing world. To inform this discussion, I sat down with Seema Lakhani, Chief Product Officer at Wattpad.

Transform It Forward with Seema Lakhani: Digital disruptions in the publishing world

Wattpad is a user-generated, online platform where readers and writers come together to create and consume stories. The platform was recently acquired by Naver for $600 million, which has opened up even more possibilities for the company to continue innovating in the future.

During our discussion, Seema and I covered everything from the creator economy to why we’re living in a golden age of content, so I think you’ll find our conversation both fascinating and informative.

Reading, writing, and storytelling in the mobile revolution

When Allen Lau and Ivan Yuen first founded Wattpad in 2006, they had an inkling of where the publishing industry might be headed. Even before the Smartphone era, they had a hunch that mobile phones were destined to take over nearly every industry, but they never could have predicted the large-scale changes that were brought about by the mobile revolution.

Today, Wattpad has more than 90 million people coming on the platform each month to read, write and share stories—in Seema’s words, everything from romance to science fiction and everything in between.

“I don’t know that they would have predicted that it got to where it did in terms of actually changing the nature and shifting how people read and what people read and what people are writing and who’s becoming a successful writer, and all of these interesting things that have emerged as a result of the company and the user-generated content and social and all of the sort of technology trends that happened in the last 15 years that Wattpad was very much a part of.”

The concept of digital storytelling isn’t new—in fact, the popularity of formats like blogging predated Wattpad. However, what Wattpad has done is take a physical medium like book publishing, and approached it in an entirely new manner that’s made it easier than ever for people to branch off into new genres, stretch their creative limits, and connect with one another on an intimate level.

“We couldn’t have imagined the kinds of genres and subgenres and types of content that people were creating and thinking about and where imaginations can take you. I mean, storytelling is so broad—it’s existed since the beginning of humanity. And so the idea that they were going to continue to fit into sort of the standard boxes of the classic genres people are expecting of, it’s either literary or it’s mystery or it’s romance or it’s whatever it might be, we’ve seen that change dramatically.”

As an expert in product development, Seema has also become an expert in the user journey over the years. She believes Wattpad has created three distinct user journeys: the reader’s journey, the writer’s journey, and the journey of the story itself, which very often takes on a life of its own beyond even the imagination of the author.

However, the common thread that connects these separate journeys is the idea of collection and belonging.

“We tell stories to each other to feel connected to each other, to feel part of something bigger than ourselves, and to basically create these characters and these concepts that we can relate to in different ways. And so I think ultimately that’s the thread that connects all of this, this sort of reader and writer end and the IP itself going on to become something that can be hugely life changing and world changing.”

The way Wattpad enables this sort of intimate connection and reader-writer relationship is unmatched in the market. Seema believes this is ultimately what differentiates the platform from other offerings: the way it’s brought the experience of reading and writing to life beyond the relatively flat experience of traditional reading.

Through tools and features that allow for real-time commentary and feedback, like in-line comments, Wattpad has turned the act of reading and writing into an interactive, social experience. In this way, the platform marries aspects of modern social media with the age-old experience of telling and consuming stories that we all know and love.

“It’s that experience of ‘other people are feeling this, too. We’re all in this together,’ that you don’t generally get in books or even in a lot of forms of storytelling out there. And so when I think about how we need to continue to develop the product and how we’ve been successful to-date with our product, it’s been a lot of those little moments and really understanding the emotional journey that people are going on as they read a story or write a story.”

Seema mentioned that in many ways, we’re currently living in a “golden age of content.” Whether it’s video, audio, text, or visual, the internet has enabled an explosion of creative content to proliferate in a variety of forms, styles and mediums.

As a result, creators everywhere have more options and opportunities than they’ve ever had access to before.

“You’re starting to see the emergence of more platforms like Patreon or Substack or models like that, where there is a lot more ability for the creator to kind of navigate and own their own futures and success and their own audiences and determine it in the way that makes sense for them. And I think that’s a fascinating shift in sort of the platform layer, which does serve a really important role in helping content get discovered through to how people monetize it and how they manage their careers around it.”

As Seema explained, the golden age of content is ultimately empowering creators to own their journey and build a career out of their creations in a way that benefits them first, rather than the platform or another third party. In the near future, Seema believes we’ll continue to see this movement gain traction, which will allow the creator economy to evolve across all forms of content creation and set into motion a positive shift in the typical power dynamics.

Listen to the full podcast episode here, catch up on previous episodes, and subscribe for updates wherever you get your podcasts.