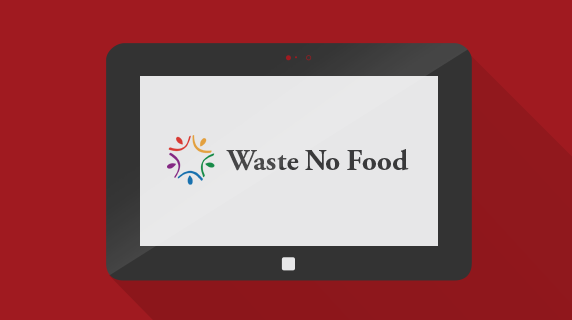 When’s the last time you heard about a new app that’s genuinely changing the world for the better? We’ve got one for you.

Waste No Food is a California-based nonprofit whose digital “marketplace” connects people who have excess food with the hungry. It was founded five years ago by a seventh grader named Kiran Sridhar who, after learning that America produces six times the amount of food needed to feed everyone on the planet, decided that he wanted to help resolve this problem using technology. Today, Waste No Food harnesses mobile to address the core distribution problem behind wasted food.

Here’s how it all started.

A few years ago, when Waste No Food was a young nonprofit, eBay held one of its annual hackathons where groups were tasked with creating a mobile app for the nonprofit of their choosing. One group chose Waste No Food, built a lightweight mobile app using Appcelerator and went on to win the eBay hackathon.

When WNF saw the huge potential of the app that the eBay team had developed, they were thrilled. Communication barriers have always existed between donors and charities, making it difficult for nonprofits to obtain timely help from those willing to provide it. Mobile technology proved to be a perfect solution for knocking these logistical barriers down.

After using the app for over a year, WNF decided to take it to the next level. The nonprofit turned to Appcelerator and WinWire, who took a mere four weeks to extend the existing app into a full-featured, dynamic cross-platform app. The app has since helped redefine how donors connect with charities and made a giant leap forward in helping Waste No Food achieve its mission.

Already the app has seen significant traction in the San Francisco Bay Area. Most recently, Waste No Food has been working with the City of San Jose, the Silicon Valley Talent Partnership and Team San Jose, which manages the San Jose Convention Center. After just two weeks of donations from Downtown San Jose, Waste No Food has donated approximately 30,000 meals!

Originally developed to connect individual donors with charities, Waste No Food is now also beginning to work with the cafeterias of large companies to decrease the amount of food wasted in the corporate world. And a handful of Bay Area restaurants have already teamed up with Waste No Food to distribute their excess food to those in need.

Looking forward, Waste No Food anticipates expansion internationally and particularly into the developing world where mobile phone penetration is on-par with that of the developed world.

Often there are plenty of people out there who would be willing to help with philanthropic causes, but getting involved isn’t as easy as snapping your fingers. With today’s busy and hectic pace, mobile can be an ideal way to connect with potential donors on their platform of choice. When it comes to addressing hunger and food waste—two opposite but very connected problems—sometimes it’s as simple (and as hard) as solving a logistics problem.

The post-Web world where mobile reigns supreme means all businesses, for-profit and nonprofits must figure out how to connect with their audiences in the best and most convenient ways. As Waste No Food has demonstrated, mobile enables faster, more efficient and more effective lines of communication, and when applied to a serious problem, can wield enormous transformative power.

Check out this video to hear from KIran directly how Waste No Food is working to eradicate hunger. And stay tuned in the coming months for an update on Waste No Food’s progress!