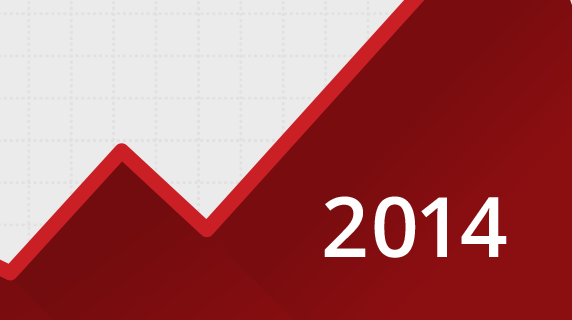 For the last two decades, Mary Meeker and her team has put together the definitive twice-annual presentation on internet trends. She does a great job of distilling numbers and facts into a cohesive picture of where we are now and where we’re headed when it comes to technology.
This year – surprise! – it’s all about mobile. We went through her deck, all 164 slides, and pulled out the key information and observations for enterprises who are keeping an eye on mobility trends and want to know where they stand today and what’s coming down the pike.

Smartphone adoption increased 20 percent in 2013. Though this is healthy growth for any technology class, it represents a maturing market. According to IDC, 2013 saw smartphone unit shipments grow 39.2 percent compared to 2012, but the research group predicts that growth will slow to single digits in 2014. Still, there’s plenty room to grow – only 30 percent of the 5.2 billion mobile phones in the world are smartphones today. India and China particularly represent huge under-tapped markets. Then there’s the matter of tablet growth, which continues as the most rapidly adopted technology in history. Meeker also points out that to-date, each new “computing cycle” has had about 10 times the installed base of the previous one:

By this math, the mobile internet is likely to reach 10 billion units before the next computing cycle takes hold.

2. Mobile Internet Use Is Speeding Up

Smartphone growth might be slowing but mobile internet use is accelerating — rapidly. Comscore recently revealed that the internet is being accessed more frequently via mobile apps than via desktop computers for the first time ever in the U.S. In 2013, mobile internet usage increased by 81 percent, with video serving as a key driver of this growth. It might seem counter-intuitive that mobile internet use is increasing even as smartphone shipments are slowing down, but it’s important to remember that the mobile internet is most often accessed through apps, which can run on phones, tablets, smart car interfaces, smart appliances and more. Tablets (as referenced above) in particular have a huge runway and are growing faster than the PC ever did (52 percent in 2013). Additionally, most mobile internet usage is happening via apps (47 percent), rather than mobile web browsers (8 percent).

3. There’s Mobile Money to Be Made

Internet advertising continues to be a money-maker, and in 2013 mobile ads grew 47 percent. They now represent 11 percent of all internet ads, and that growth is unlikely to slow down anytime soon. Meeker is bullish on mobile ad spend, pegging the opportunity as being worth $30 billion in the U.S. alone. Meeker points out that print is over-indexed today and there is plenty of room for mobile advertising to grow and match the amount of attention being spent on the channel by consumers. However, today mobile app revenue still accounts for 68 percent of all mobile money made today, far outpacing mobile ads.

Apps are becoming simpler. Witness Facebook unbundling messaging to provide a more streamlined user experience. From the days of complex, multipurpose mobile apps, we are moving toward a world of minimalist, purpose-built ones. Moreover, some apps aren’t even interacting with the user anymore, only the sensors around them. Meeker calls these “invisible” apps. Runkeeper’s Breeze is a great example of these purpose-built and contextual apps – it tracks daily movements passively in the background, requiring users to do nothing more than download the app. (What’s the difference is between an app and an application? Check out our recent post on the topic.) User experience is driving mobile’s astounding growth. Users have never been more demanding of amazing experiences, so it stands to reason that businesses are increasingly focusing on delivering that to customers and employees alike.

5. Data is the Real Story

In today’s mobile-first world, consumers generate more data than ever before, including lots of rich, data-heavy content like photos and video. Two-thirds of the world’s content today is created and consumed by consumers, including the 1.8 billion photos that are uploaded and shared each day. On the positive side, the cost of processing and analyzing this data is falling, making it easier than ever for users to upload, share and find content. But this doesn’t make life easier for enterprise developers, who’ve discovered that things like photo storage and social integrations are table stakes even for internal mobile apps. The palette of essential services necessary for creating a mobile app grows every day: from push notifications to geo-fencing to speedy photo and video storage and beyond. This is why having a repository of these services (so that they can be quickly added to apps and accessible via mobile-optimized APIs) is vital for delivering great mobile experiences.
Want more details? Check out the full deck below:

What did you think of this year’s deck? Did any of Meeker’s observations or predictions surprise you? Tell us in the comments.