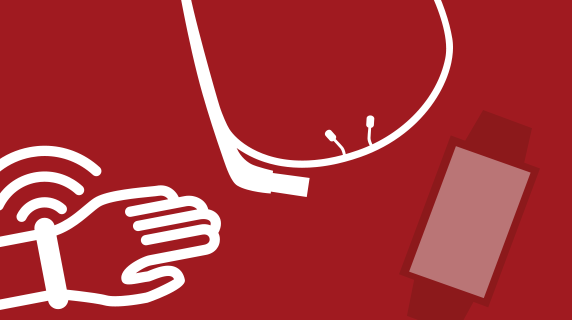 This summer, Pebble and the XDA Forums held a developer contest for the Pebble Smartwatch. Out of a couple hundred submissions, 20 finalists were chosen and then three winners. Our own Matt Congrove, a solutions architect here at Appcelerator (and huge wearables fan) decided to throw his hat into the ring. He was selected as a finalist, at which point he and his cohort had three weeks to develop and publish their apps. While Matt didn’t win, he did enjoy developing his first full-fledged Pebble app and agreed to chat with us about the experience and where he sees the wearables market headed next.
What made you want to enter this contest?
I’d done some Pebble development before, so it was something I’d been following for a while. Anytime they announce something like this, I try to join in. The watch is an exciting new form factor to develop for, with a lot of opportunity to design unique experiences. So for me, it was kind of a no-brainer. Immediately, I could think of a dozen ways I could make life easier using it. (Ed. Note: Matt’s hanging onto those ideas for future use.)
Tell us a little about your entry and how you built it.
My app is called BiteBook, and it’s a really simple way to log catches while out fishing. There are plenty of catch-logging apps out there, but most of them require you to have your phone in hand. I don’t like to have my phone out while on the water, for obvious reasons. My app connects to your smartphone via the Pebble Smartwatch so you can log catches right from your wrist. It’s all about making the process more convenient and safer (for your pricy phone).
How is your Pebble app different from the smartphone version?
On a phone, you have a few more options. On the Pebble, simplicity is the name of the game. So with BiteBook, you can just pick the species, weight and length. It automatically logs time and GPS coordinates. I’ve already put it to use myself while kayak fishing, and I just released the Android version a few days ago. I’ve gotten some great feedback so far.
Was there anything particularly surprising about developing for Pebble? Any key learnings?
The experience was a little different for me, because I’ve only ever developed “watchfaces,” which display time. I’d never done a full smartwatch app before. Pebble has made it really easy to develop with a drag-and-drop UI builder. You can develop Pebble apps using Javascript now, and when you pair that with the tools Appcelerator offers, it’s possible to develop a smartphone and smartwatch apps all in Javascript and get them talking to each other seamlessly.
Do you think the Apple Watch be a category-changer for smartwatches? Why/why not?
The fact that it’s an Apple product means people are going to pay attention. But I think it’s a case of the rising tide lifting all boats. Apple has the mindshare to bring the smartwatch category to the masses, which could be good for Pebble and other smartwatch makers, too. Of course, we’ll have to wait and see just how successful the actual Apple Watch is. I have some reservations about the battery life, which is still the biggest hurdle for these types of wearables. Pebble gets around it by keeping the display very simple – it’s just black and white E Ink, with strict limits on app sizes. They didn’t say what the Apple Watch’s battery life is going to be, so it will be interesting to see how that shakes out.
What’s your vision for the future of wearables?
I love this stuff. I have Google Glass and three Pebbles, and I’m definitely excited to develop for the Apple Watch. But in general, I think we’re on the cusp of a major shift in how people use wearables. When Pebble first came out, developers wanted to make apps that only ran on Pebble. Now you can see the shift as developers start thinking more along the lines of, “How can I use the smartwatch or Glass to complement my smartphone app?” Wearables, at the end of the day, are a new category and bring a fresh set of use cases and opportunities for developers to problem-solve and think outside the box.
What’s the most interesting use case for Pebble apps you’ve seen so far?
I recently came across an app for the hard of hearing that enables people with normal hearing to speak into their Android phones via an app, and then that speech appears as text on the deaf person’s Pebble watch. This suddenly makes it possible for people with hearing differences to communicate between one another without having to learn sign language. It’s a great example of how a smartwatch app can be simple, purposeful and impactful.
What should developers be thinking about right now? What advice would you give?
Developers really need to start thinking about how they can take the experiences they’ve already built for mobile and extend them to wearables in a way that augments, rather than distracts. You can even think about smartwatch apps as a sort of “sidekick” for their smartphone counterparts. So, figure out how to take what you currently have and make it a little simpler and more accessible. That’s a great way to get started and start to build experience in this space, which we think will see a lot of traction.
Hungry for more wearables talk? Check out our recent Q&A with Lopez Research founder Maribel Lopez on whether wearables are truly enterprise-ready. And tell us what you think about developing for smartwatches in the comment section below!