The ASW enables the secure exchange of electronic cross-border customs information between traders and governments and between exporting and importing countries. It expedites the cargo clearance process, removing the need for paperwork, as well as reducing the cost and time of doing business, enhancing trade efficiency and competitiveness via electronic document-sharing.

Nine of the 10 member states use AMPLIFY™ B2B Integration for their ASW Gateway needs. In addition, Thailand and Indonesia also use the solution for their National Single Window requirements. The following figure illustrates the current high-level ASW environment: 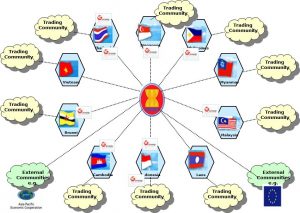 Through the ASEAN Community Blueprint, adopted in 2007, the ASEAN leaders committed to transforming ASEAN, by 2015, into a single market and production base, a highly competitive economic region and a region fully integrated into the global economy. In terms of trade within the ASEAN region, the principal goal of the ASW Project was to replace a slow and costly paper-based system with the electronic exchange of cross-border documents through a solution that is swift, secure and accurate.

The ASW project had three main phases for each ASEAN Member State (AMS) on joining. Phase 1 covered the exchange of ATIGA (ASEAN Trade In Goods Agreement) Form D: Certificate of Origin to Expedite Customs Clearance for a two-month end-to-end exchange of test data from one NSW to other NSWs in an integrated, secured ASW environment adhering to the technical design of the ASW Pilot Project. Phase 2 then covered a two-month parallel run for both test and live data, and Phase 3 covered the live operation.

Also, the project stipulated the on-boarding of additional AMS as they become “ready,” and to include additional services such as ASEAN Customs Declaration Document (ACDD), pre-arrival documents and phytosanitary certificates with minimal change to the overall ASW implementation.

To test the feasibility and functionality of the ASW project, ASEAN issued an RFP in 2011 for a preliminary pilot to be developed with the support of the U.S. Agency for International Development (USAID). The pilot was designed to show that the ASW could:

The preliminary pilot was a success, and the lessons learned from the experience led ASEAN to issue a second RFP in 2015 for a full-scale rollout. As well as being awarded the contract for the initial pilot, Axway again won the tender for the full-fledged ASW project. The overall ASW solution was then modified concerning the new requirements and suggested improvements.

For the full-fledged phase of the ASW Project (2015 to 2020) Axway has been deploying, testing and transitioning to live each of the ASEAN Member States.

A representative from OASIS ebXML Messaging Services Technical Committee provided a compelling presentation to all Member States at their Technical Working Group event back in 2012 on ebXML as the recommended technology for the transport, routing and packaging of business transactions related to ASW Project Objectives.

Axway came to the ASW project not just as an IT vendor, but as a company that understood how customs and clearance processes work. Going forward, this was to prove a critical factor in making the project a success, as well as having the ability to support each of the Member States through the challenges of the various project stages.

The platform originally went “live” on January 1, 2018, for five ASEAN member states. As of today, all 10 ASEAN Member States (Indonesia, Malaysia, Singapore, Thailand, Vietnam, Laos, Myanmar, Philippines, Cambodia and Brunei) are participating in the Live ASW operation. This means that importers are no longer required to wait for hard copies of certificates of origin to arrive and can clear their goods more quickly.

Indonesia, one of the five early adopters, has seen the impact of exchanging the Certificate of Origin electronically. “We’ve cut the cargo release time by half for ASEAN-origin containers,” said Muwasiq Noor, Deputy of Operation and Development, Indonesia National Single Window Operating Agency. “We’ll see even greater benefits once everything is paperless.”

The following diagram shows the end-to-end flow of an ACDD document from Indonesia National Single Window (NSW) to Thailand NSW. 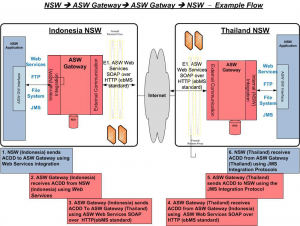 For back-end integration needs with the respective NSWs, the ASW Gateway solution had to be flexible as each country had different requirements. Four Application Pick Up/Delivery options were provided in Axway B2Bi.

The diagram below provides the overall ASW architecture. Note this diagram reflects seven ASEAN Member States, Regional Services Gateway and Regional Services Portal. Please be aware that Cambodia, Myanmar and Laos have since joined, but the architecture for each individual AMS remains the same. 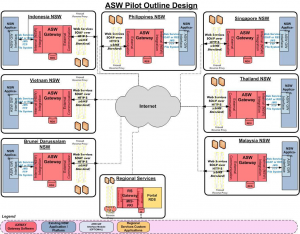 Let us take one “country NSW” as an example. The blue box represents the NSW back-end applications. Here we have, for example, an application generating and processing ATIGA Form D (for ASEAN Trade in Goods and Agreement), the Certificate of Origin. We then have the four integration options between the respective ASW Gateway and the NSW. The red rectangle represents the ASW Gateway. This is the Axway B2Bi part managing the NSW integration and all the external communications and associated security requirements with external AMS.

The red rectangle is another Axway B2Bi instance. This gateway’s function differs from the other 10 ASW Gateways. Regional Services collates a daily report from each of the ASW Gateways. This report covers all inbound and outbound transactions for a 24-hour period from each ASW Gateway, including all the acknowledgment status messages, and passes to the Regional Services portal (yellow box) for document tracking and report generation purposes. The Daily report generation and SFTP upload are automated on each ASW Gateway.

Within the ASW Environment we have various key components to consider:

Axway B2Bi is the underlying solution for each of the ASW Gateways. For each AMS, we have one instance for the Production Environment, one for Disaster Recovery/Standby Environment, and another for the Test Environment. The following diagram provides an example of deployment architecture for one ASEAN Member State.

Secure Relay running in the DMZ was provided as an option.

For ASW the Acknowledge Status receipt is designed to provide the status of a business document at various stages in the cycle between a sending NSW and a receiving NSW.

The following diagram illustrates the end-to-end flow of an example ATIGA Form D sent from Malaysia to Thailand and the role of each of the four acknowledgment status messages. 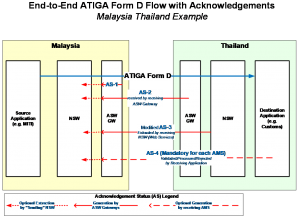 For the original trade document (e.g. ATIGA Form D) we have a minimum of four acknowledgment status messages in a full exchange between two AMS.

The Regional Services MIS module on the Portal will provide facilities to:

In summary, the Regional Services MIS module on the portal will collate, process and distribute technical statistics on the performance of the ASW, as well as provide real-time information on the availability of the respective ASW gateways.

The following screenshot shows the health of the various ASW Gateways in ASEAN (i.e., Axway B2Bi is up and running) with the option to drill down to get a detailed view of any AMS, e.g. Vietnam ASW Gateway. 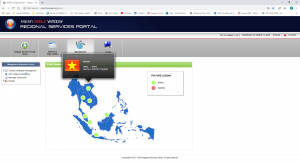 The MIS module provides statistics on each ASW Gateway, showing the number of messages exchanged based on specific reporting criteria. As well as the trade documents exchanged, the portal also includes tracking of all the related acknowledgment status messages.

Since the outset of the project, there have been various training events delivered for ASW Gateway staff in the region. This training was a highly customized version of the standard Axway B2Bi training for ASW operational needs, with an emphasis on ebXML protocol and some basic Mapping Services. Read more about the benefits of B2Bi integration with iPaaS.

An advanced training course is planned for all AMS for Q2 2020.

There have been a variety of enhancements introduced to the original ASW architecture design and message flow since the pilot program back in 2012. The most notable being a gradual transition to use the common header concept for all trade documents being exchanged between ASW Gateways.

The overall objective was to enhance the existing ASW Platform to support a more common message implementation framework that will work for the exchange of the ACDD, e-Phyto and other cross-border document agreed by member states, as there was no common standard in place for the various trade documents planned for ASW  (e.g., ACDD follows WCO, while e-Phyto follows UNCEFACT)

This required an update to the existing XSD for the ASW Gateway Common Header (additional fields) and modifying the ASW gateway message flows to permit implementation of the e-Certificate of Origin (864), or other additional electronic documents in common header format going forward.

ASEAN has an ambitious program for extending the reach of the ASW, including:

Read the Axway case study with The Association of Southeast Asian Nations (ASEAN). 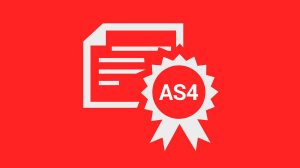 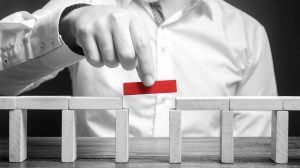 The challenges of B2B integration and collaboration 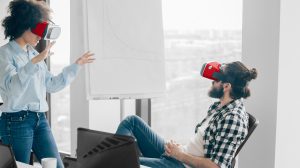 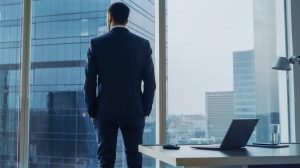 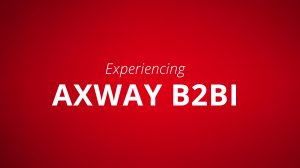 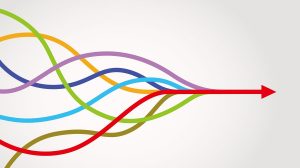 Benefits of B2B integration with iPaaS