Home Products API Management What are the different types of APIs?

There isn’t just one type of API (Application Programming Interface) but actually, there are four main types of APIs: 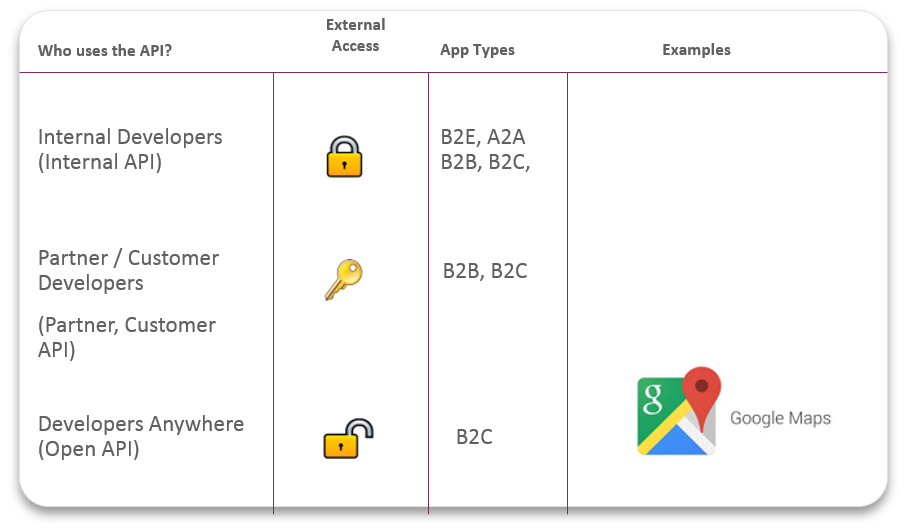 Beyond the difference between internal, partner, open, and composite APIs, we should mention another approach to categorize APIs:

To leverage these different types of APIs, we must follow certain protocols. A protocol provides defined rules for API calls. It specifies the accepted data types and commands. Let’s look at the major types of protocols for APIs:

REST (short for Representational State Transfer) is a web services API. REST APIs are a key part of modern web applications, including Netflix, Uber, Amazon, and many others. For an API to be RESTful, it must adhere to the following rules:

SOAP (simple object access protocol) is a well-established protocol similar to REST in that it’s a type of Web API.

SOAP has been leveraged since the late 1990s. SOAP was the first to standardize the way applications should use network connections to manage services.

But SOAP came with strict rules, rigid standards were too heavy, and, in some situations, very resource-intensive. Except for existing on-premise scenarios, most developers now prefer developing in REST over SOAP.

An RPC is a remote procedural call protocol. They are the oldest and simplest types of APIs. The goal of an RPC was for the client to execute code on a server. XML-RPC used XML to encode its calls, while JSON-RPC used JSON for the encoding.

Both are simple protocols. Though similar to REST, there are a few key differences. RPC APIs are very tightly coupled, so this makes it difficult to maintain or update them.

To make any changes, a new developer would have to go through various RPCs documentation to understand how one change could affect the other.

APIs play a key role in the development of any application. And REST has become the preferred standard for building applications that communicate over the network.

REST fully leverages all the standards that power the World Wide Web and is simpler than traditional SOAP-based web services. Unlike RPC, it allows for a loosely coupled layered architecture to maintain easily or update them.