We held a global Hackathon between various Axway R&D centers in the USA, France and Ireland and we branded the event “PDG Invent” (Phoenix, Dublin, Grenoble). The event lasted a week and people brought their “A game” to the table.

We saw huge energy levels, collaboration and challenging each other to reach higher to achieve innovation. Some projects and outcomes of the Axway Hackathon will be adopted and brought forward to production.

We only had a couple of rules that focused on projects that were being worked on. To foster collaboration, we asked that people not work with the team they work with daily. As part of the Axway R&D Manifesto, we want people to be comfortable and happy to collaborate in an open environment and we are proud of our multicultural and geographically diverse workforce.

To align with the goals of the company, we asked that projects that people worked on and would contribute to:

On the last day of the week, teams had to take part in global “show & tell” to all the R&D teams. In the show & tell teams had 10 minutes to present the work that they had done. The 10 minutes were divided into the following sections, an overview of the problem being solved, what we learned, demo and conclusion and what would be potential next steps. 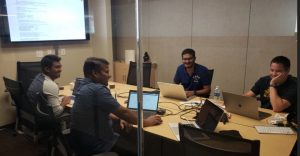 During the Axway Hackathon, we witnessed the following trends:

Shift left: many projects looked at the ability to produce content (videos, animated gifs, documentation) that could be produced as close as possible to when the feature/capability is created. The result is that anyone in a delivery team should be capable of producing content. The days that delivery teams only produce code are long past!

Operational concerns: projects looked at how component(s) could be deployed or tested more easily during its lifecycle, way beyond the CI but all the way into production.

APIs are now the norm: we have APIs everywhere and a lot of projects targeted the advancement of API adoption both from within Axway and what it means for our customers when they attempt to use our platform.

Polyglot technologies: given the adoption of new languages within Axway, it’s not surprising that golang, rust and yaml (for configuration) featured prominently.

Continuous improvement technical: projects that looked at how the internals of existing products and services could be improved architecturally from API Management v7 and to Streamdata.io.

Continuous improvement process and tools: a number of projects that looked at how we’re evolving in agile maturity and the tooling that we’re using to support this evolution.

We hold the week-long hackathon in Axway every six months. As we have been journeying to the cloud it’s amazing to see the standard of ideas, projects and presentations have grown in scope and breadth!

Well done to everyone involved!

Read all about the Unisuper Hackathon that took place in 2019.